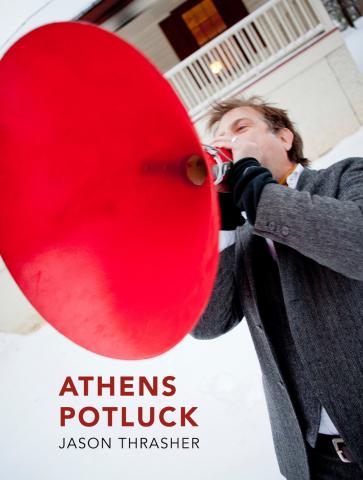 Photographer Jason Thrasher selected the first musician for the series, Laura Carter of Elf Power and the Orange Twin Collective, photographed her, and asked her five questions; Laura then chose and posed her questions to Will Hart, of Olivia Tremor Control, who chose Julian Koster of Neutral Milk Hotel, and so on. Most recently, Michael Stipe of R.E.M. interviewed Andy LeMaster of Now It's Overhead and Bright Eyes. Jason photographed each musician at home or in the studio, along with his or her questions, which have been written variously on vinyl records, album covers, on books and in works of art, for the next artist. The series has veered from the E-6 Collective to rock, to traditional old-time music, to punk, to country and back to indie again, with musicians driving the project forward as they pass the baton from one to the next. Athens Potluck is a glimpse into the richly diverse and oft secretive Athens music scene, spawned decades ago by R.E.M., Pylon and the B-52s.

Thrasher has been working nationally as an artist and professional photographer based out of Athens for nearly twenty years. His coverage of the Southeast's music scene includes portraits and tour photography for hundreds of musicians, and his iconic music photography has been published in Rolling Stone, SPIN, The New York Times, Paste and Pitchfork. His fine art photography has been exhibited internationally in museums and galleries such as the ICA in London, the Yerba Buena Arts Center in San Francisco, the Ogden Museum of Southern Art in New Orleans and the Corcoran Gallery in Washington, DC.

To see more of his work, visit ThrasherPhoto.com.