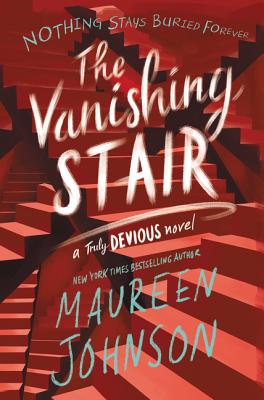 This is book number 2 in the Truly Devious series.

I haven't quite been able to take a full breath since finishing TRULY DEVIOUS, so I almost passed out when I saw this book out on the floor. Maureen Johnson works some serious magic with THE VANISHING STAIR; this mystery is compelling as heck and filled with a cast of characters I wish I was friends with. My only complaint is that we have to wait another year for the next installment, so I guess I'll just be stumbling around trying to cope with this new cliffhanger until then.

In New York Times bestselling author Maureen Johnson’s second novel in the Truly Devious series, there are more twists and turns than Stevie Bell can imagine. No answer is given freely, and someone will pay for the truth with their life.

The Truly Devious case—an unsolved kidnapping and triple murder that rocked Ellingham Academy in 1936—has consumed Stevie for years. It’s the very reason she came to the academy. But then her classmate was murdered, and her parents quickly pull her out of school. For her safety, they say. She must move past this obsession with crime.

Stevie’s willing to do anything to get back to Ellingham, be back with her friends, and solve the Truly Devious case. Even if it means making a deal with the despicable Senator Edward King. And when Stevie finally returns, she also returns to David: the guy she kissed, and the guy who lied about his identity—Edward King’s son.

But larger issues are at play. Where did the murderer hide? What’s the meaning of the riddle Albert Ellingham left behind? And what, exactly, is at stake in the Truly Devious affair? The Ellingham case isn’t just a piece of history—it’s a live wire into the present.

Praise for Book One:

“Remember the first time reading Harry Potter and knowing it was special? There’s that same sense of magic in the introduction of teen Sherlock-in-training Stevie Bell.” —USA Today (four stars)

Maureen Johnson is the bestselling author of several novels, including 13 Little Blue Envelopes, the Truly Devious series, the Suite Scarlett series, and the Shades of London series. She has also written collaborative works such as Let It Snow with John Green and Lauren Myracle and The Bane Chronicles with Cassandra Clare and Sarah Rees Brennan. Maureen lives in New York and online on Twitter @maureenjohnson or at www.maureenjohnsonbooks.com.

“In this second . . . installment, Johnson gives and she takes away: a few major
mysteries are satisfying solved, but other long-standing riddles remain tantalizingly indecipherable, and several new ones come into play by the enigmatic end. Readers, hang tight: there’s one more round to come, and if the signs are right, it’ll be to die for.” — Booklist

"Ramps up the intrigue. As before, Johnson deftly alternates between Stevie's first-person narrative. Throughout this volume, Johnson's compelling would-be Sherlock proves to be as bad at personal relationships as she is adept at solving mysteries. Teen angst soars as Johnson delightfully conjures up more nefarious deeds from the mountain mist." — Kirkus Reviews (starred review)

“Johnson gives and she takes away: a few major mysteries are satisfying solved, but other long-standing riddles remain tantalizingly indecipherable, and several new ones come into play . . . Readers, hang tight: there’s one more round to come, and if the signs are right, it’ll be to die for.” — Booklist

“Take it from the world’s most impatient reader: If the Truly Devious series is basically one long mystery book, The Vanishing Stair is a middle part so enjoyable you won’t even want to skip to the end.” — Entertainment Weekly

“Johnson judiciously doles out some satisfying partial answers to the historical case while (presumably) saving the big reveals for the next installment. This fulfilling second volume will gratify serious mystery fans; and many readers will enjoy seeing themselves reflected in Stevie’s diverse and eccentric group of friends.” — The Horn Book

“Waiting for the next installment of Maureen Johnson’s Agatha Christie-Sherlock Holmes-classic mystery homage series was torture, but The Vanishing Stair is oh so worth it.” — Bustle

Praise for TRULY DEVIOUS: “Jumping between past and present, Johnson’s novel is deliciously atmospheric, with a sprawling cast of complex suspects/potential victims, surprising twists, and a dash of romance. Johnson remains a master at combining jittery tension with sharp, laugh-out-loud observations.” — Publishers Weekly (starred review)

“Johnson quickly sets the game afoot, skillfully introducing a Clue-like set of characters, laying out various motives, and hinting at long held secrets. There’s a delicious slow-burn element to the locked-room mystery in Stevie’s present, while the chapters on the kidnappings read like a true crime novel.”
— Bulletin of the Center for Children’s Books

“Johnson deftly twists two mysteries together—Stevie’s investigation is interspersed with case files and recollections from the Ellington kidnapping—and the result is a suspenseful, attention-grabbing mystery with no clear solution. The versatile Johnson is no stranger to suspense, and this twisty thriller will leave plenty of readers anxious for more.” — Booklist

“An intricately plotted, compulsively readable novel that explores not only fascinating crimes but also the mysteries of anxiety, the creative process, contemporary fame, and so much else.” — John Green, author of The Fault in Our Stars and Turtles All the Way Down

“Stevie Bell is a dyed-in-the-wool true-crime buff. There is a lot to love here. Fans of puzzles, boarding school stories, and true crime will tear through this book and love every minute.”  — School Library Journal

“The story raises more questions than answers, leaving readers hoping Johnson has another entry up her clever sleeves. A classic mystery that would make Dame Agatha proud.” — Kirkus Reviews