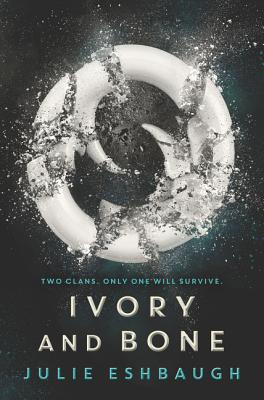 “Julie Eshbaugh is a unique new voice with talent enough for a whole team of writers. I’m still under the spell of her storytelling.”—Amie Kaufman, New York Times bestselling co-author of Illuminae and These Broken Stars

Loosely inspired by Pride and Prejudice, Ivory and Bone is an enthralling tale of high-stakes survival, blinding betrayal, and star-crossed love.

Hunting, gathering, and keeping his family safe—that’s the life seventeen-year-old Kol knows. Then bold, enigmatic Mya arrives from the south with her family, and Kol is captivated. He wants her to trust him, but any hopes of impressing her are ruined when he makes a careless—and nearly grave—mistake. What Kol doesn’t know is that underneath Mya’s cool disdain is a history wrought with loss that comes to light when another clan arrives. With them is Lo, an enemy from Mya’s past who Mya swears has ulterior motives.

As Kol grows closer to Lo, tensions between Mya and Lo escalate until violence erupts. Faced with shattering losses, Kol is forced to question every person he’s trusted. One thing is for sure: this was a war that Mya or Lo—Kol doesn’t know which—had been planning all along.

With riveting action and illustrative prose that leaps from the page, Julie Eshbaugh will have readers mesmerized and thirsty for more…So don’t miss the sequel, Obsidian and Stars.

Julie Eshbaugh is a YA writer and former filmmaker. She made two short films and then spent several years producing an online video series for teens, which received several honors from the Webby Awards. You can learn more about Julie’s writing escapades (with the online group Publishing Crawl) by visiting www.julieeshbaugh.com.

“Julie Eshbaugh is a unique new voice with talent enough for a whole team of writers. Ivory and Bone transported me to a richly crafted world of life-and-death stakes, and I’m still under the spell of her storytelling.” — Amie Kaufman, New York Times bestselling co-author of Illuminae and These Broken Stars

“Exquisitely written, ferocious, and haunting--what a breath of fresh air! Ivory and Bone is unlike anything I’ve ever read. Don’t miss this one!” — Sarah J. Maas, New York Times bestselling author of the Throne of Glass series

“Debut author Eshbaugh portrays Neolithic culture with grace and authenticity. This is an involving story solidly told, doing credit to its inspiration and sources.” — Kirkus Reviews

“Eshbaugh debuts with an exciting and unusual adventure with emphasis on the power of storytelling.” — Publishers Weekly

“Eshbaugh creates a spare yet memorable account of the interpersonal and interclan politics. There is much to value here.” — ALA Booklist

“Eshbaugh packs her debut with a classic love triangle, feuding clans, a well-drawn prehistoric setting, and a handful of fan fiction elements that will appeal to teens. Compellingly out of the ordinary.” — School Library Journal

“The Ice Age setting is richly described, and the sometimes desperate struggle for food and survival is palpable. Highly recommended; readers will be anxiously awaiting the next book in the series.” — Voice of Youth Advocates (VOYA)

“There is clear authenticity in the descriptions, and they evoke the desperation, loyalty, and determination that a small group like this would have likely felt.” — Bulletin of the Center for Children’s Books

“Hands down the most unique debut YA novel of the year.” — PasteMagazine.com