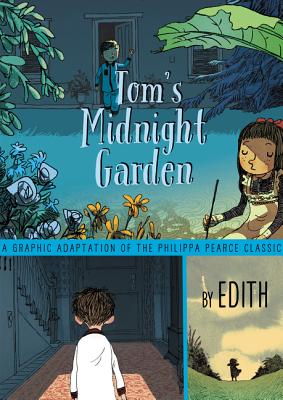 This exquisite graphic novel adaptation of Philippa Pearce’s Carnegie Medal–winning Tom’s Midnight Garden reimagines a beloved classic in a new, full-color format. With stunning art from award-winning graphic artist Edith, readers will be swept up in this transcendent story of friendship.

When Tom’s brother gets sick, Tom’s shipped off to spend what he’s sure will be a boring summer with his aunt and uncle in the country. But then Tom hears the old grandfather clock in the hall chime thirteen times, and he’s transported back to an old garden where he meets a mysterious girl named Hatty. Tom returns to the garden every night to have adventures with Hatty, who grows a little older with each visit. As the summer comes to an end, Tom realizes he wants to stay in the midnight garden with Hatty forever.

Philippa Pearce is the author of many books, several of which are considered classics both in the United States and in her native England. Her award-winning titles include Tom's Midnight Garden, which received the Carnegie Medal and was an ALA Notable Book; The Battle of Bubble and Squeak, which received the Whitbread Award; and Mrs. Cockle's Cat, which received the Kate Greenaway Medal.

“This gorgeously rendered adaptation of a classic work of children’s literature adeptly brings to life Pearce’s descriptive language. ...This excellent graphic novel adaptation will introduce the tale to a new generation of readers. A must-purchase.” — School Library Journal (starred review)

“Expertly varied, atmospheric panels shift in mood and perspective, drawing the reader ever deeper into the magic and mystery of Tom’s nightly escapades. . . . This engrossing adaptation will allow a new generation of readers to discover Pearce’s timeless tale.” — Publishers Weekly (starred review)

“[Edith’s] fine-lined figures, sketchy shading, stylish shapes, and muted palette of natural tones balance a modern look with the old-fashioned story. Perfect for fans of time-travel adventures or fantasies with a  smidgen of historical fiction.” — Booklist