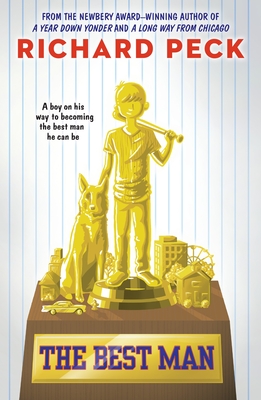 Newbery Medalist Richard Peck tells a story of small-town life, gay marriage, and everyday heroes in this novel for fans of Gary Schmidt and Jack Gantos.

Archer Magill has spent a lively five years of grade school with one eye out in search of grown-up role models. Three of the best are his grandpa, the great architect; his dad, the great vintage car customizer,; and his uncle Paul, who is just plain great. These are the three he wants to be. Along the way he finds a fourth—Mr. McLeod, a teacher. In fact, the first male teacher in the history of the school.

But now here comes middle school and puberty. Change. Archer wonders how much change has to happen before his voice does. He doesn't see too far ahead, so every day or so a startling revelation breaks over him. Then a really big one when he's the best man at the wedding of two of his role models. But that gets ahead of the story.

In pages that ripple with laughter, there's a teardrop here and there. And more than a few insights about the bewildering world of adults, made by a boy on his way to being the best man he can be.

RICHARD PECK (1934-2018) was born in Decatur, Illinois and lived in New York City for nearly 50 years. The acclaimed author of 35 novels for children and young adults, he won the Newbery Medal for A Year Down Yonder, a Newbery Honor for A Long Way from Chicago, the Scott O’Dell Award for The River Between Us, the Edgar Allen Poe Award for Are You in the House Alone?, a Boston Globe-Horn BookAward Honor for The Best Man, and the Christopher Medal for The Teacher’s Funeral. He was the first children’s author ever to have been awarded a National Humanities Medal, and was twice a National Book Award Finalist.

Praise for The Best Man

“Peck is at heart a gentle realist, a keen observer of family dynamics who uses the soft power of understated emotion to tack social issues. His latest middle grade novel, The Best Man is . . . a reminder that no matter your gender or sexuality, love is love is love.”—New York Times Book Review

* "A nostalgic slice of Rockwell Americana with a contemporary filling. Delicious—take a bite."—Kirkus Reviews, starred review

* "An indelible portrait of what it looks like to grow up in an age of viral videos and media frenzies, undergirded by the same powerful sense of family that characterizes so much of Peck's work."—Publishers Weekly, starred review

* "Rise and toast The Best Man . . . We're not done needing books like this. Comic, easy to read, swiftly paced, and matter-of-fact, Peck's latest steps out to lead the way."—Horn Book, starred review

* "A witty, engaging novel from a master storyteller."—Booklist, starred review

* “The Newbery Award–winning [Richard Peck] explores what it means to love and what it means to be a man. A modern, funny, and realistic tale featuring strong, nuanced, and unforgettable characters . . . Essential.”—School Library Journal, starred review

“Sweet…The award-winning Peck has often written from the past, but here he applies his humor and humanity to the present, where it is so sorely needed.”—San Francisco Chronicle

“Author Richard Peck relates the years between the weddings with his signature humor, using the intimacy of the first-person point of view to provide Archer’s take on his world
—sometimes clueless, always earnest—as he grows up and seeks role models…[An] endearing, full-of-life story.” —BookPage, Top Pick Review

“Insightful and witty…There's plenty of homespun wisdom here, but no hint of preaching…Peck's wandering, anecdote-rich narrative is set in Chicago, and told in the dryly funny voice
of an immensely likable, if slightly oblivious boy named Archer Magill…A modern-day delight with a satisfyingly old-fashioned feel.”—Shelf Awareness

“One of my favorite books of September for middle graders is Richard Peck's The Best Man…There is lots of humor and wisdom in The Best Man,
and to me it embodies what I want most for my child--to be caring, compassionate, and let the best of you shine through.”—Seira Wilson, Amazon Books