African Game Trails: An Account of the African Wanderings of an American Hunter-Naturalist (Hardcover) 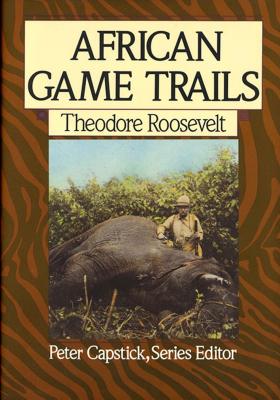 May take several months to arrive
(This book cannot be returned.)

In 1908 Teddy took a long safari holiday in East Africa with his son Kermit. His account of this adventure is as remarkably fresh today as it was when these adventures on the veldt were first published. Roosevelt describes the excitement of the chase, the people he met (including such famous hunters as Cunninghame and Selous), and flora and fauna he collected in the name of science. Long out of print, this classic is one of the preeminent examples of Africana, and belongs on every collector's shelf.

Travelling the world to hunt and kill dozens of animals including Lions, Rhinos, Giraffes, Leopards, Buffalo, Hippos and Elephants. This fascinating story about Teddy Roosevelt's hunting adventures are not for the squeamish or the politically correct as it includes heart-pounding stories.

Theodore Roosevelt was the 26th President of the United States (the first of the twentieth century), recipient of the Nobel Peace Prize, historian, naturalist, bestselling author, and perhaps the most multifaceted and dynamic figure to ever grace the residence at 1600 Pennsylvania Avenue.

Peter Hathaway Capstick (1940-1996), a former Wall Street stockbroker turned professional adventurer, was critically acclaimed as the successor to Hemingway and Ruark in African hunting literature. After giving up his career, the New Jersey native hunted in Central and South America before going to Africa in 1968, where he held professional hunting licenses in Ethiopia, Zambia, Botswana, and Rhodesia (now Zimbabwe). Capstick also served in that most perilous of trades—Elephant and Buffalo Cropping Officer. In addition to writing about hunting, he was also featured in an award-winning safari video and audio tapes.
Captstick settled in Pretoria, South Africa with his wife Fiona until his death at age 56.