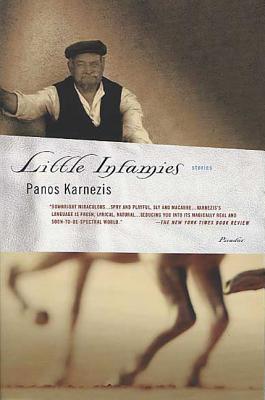 In a nameless Greek village, the lives of its citizens--the priest, the whore, the doctor, the seamstress, the mayor--and even its animals--a centaur, a parrot that recites Homer, a horse called History--are entwined. As their lives intersect, their hidden crimes, their little infamies, are revealed, in a place full of passion, cruelty, and deep reserves of black humor.

Panos Karnezis was born in Greece in 1967. He moved to England in 1992 to study engineering, and worked in industry before he started to write. He was awarded an M.A. in creative writing by the University of East Anglia. He lives in London.

“A deft stylist: clear and direct, yet subtly ironic...Like many of the masters of this genre--Guy de Maupassant, Flannery O'Connor, Eudora Welty--Karnezis is adept at delivering one startling surprise after another.” —Los Angeles Times

“Fierce, twisted, darkly funny stories...[Karnezis] has a sharp, unsentimental eye for contemporary Greek life, while deftly adding intimations of the pagan past.” —The New Yorker

“Sly, witty, fantastical, and tragic, with just a touch of something old-fashioned about them...A terrific read.” —The Seattle Times

“What a find!...The fruit of an exceptional and leaping imagination...One searches for comparisons--what one might get if Kafka collaborated with Hal Hartley, Aesop, and Italo Calvino--but Karnezis's originality and freshness, his vivid turns of phrase, are his alone.” —Annie Proulx