Those Who Wish Me Dead (Hardcover) 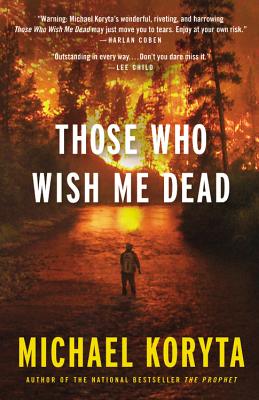 When fourteen-year-old Jace Wilson witnesses a brutal murder, he's plunged into a new life, issued a false identity and hidden in a wilderness skills program for troubled teens. The plan is to get Jace off the grid while police find the two killers.

The result is the start of a nightmare. The killers, known as the Blackwell Brothers, are slaughtering anyone who gets in their way in a methodical quest to reach him. Now all that remains between them and the boy are Ethan and Allison Serbin, who run the wilderness survival program; Hannah Faber, who occupies a lonely fire lookout tower; and endless miles of desolate Montana mountains. The clock is ticking, the mountains are burning, and those who wish Jace Wilson dead are no longer far behind.

Michael Koryta (pronounced ko-ree-ta) is the New York Times bestselling author of nine novels, including The Prophet. His last three novels, The Ridge, The Cypress House, and So Cold the River were all New York Times notable books and nominated for several national and international awards.

In addition to winning the Los Angeles Times Book Prize, his novel Envy the Night was selected as a Reader's Digest condensed book. Koryta's work has been translated into more than twenty languages. A former private investigator and newspaper reporter, Koryta graduated from Indiana University with a degree in criminal justice. He currently lives in St. Petersburg, Florida, and Bloomington, Indiana.

"Warning: Michael Koryta's wonderful, riveting, and harrowing Those Who Wish Me Dead may just move you to tears. Enjoy at your own risk."—Harlan Coben, #1 bestselling author of Missing You and Six Years

"The summer of 2014 brings Those Who Wish Me Dead, a lean, propulsive action-adventure thriller with a raging forest fire as its backdrop and with much more finesse than that description might suggest. The ingenious tricks and conversational wit of Those Who Wish Me Dead don't usually come with this territory....Attitude is one of Mr. Koryta's strongest attributes. He barges through this story with utter confidence, which makes its bravado impossible to resist."—Janet Maslin, The New York Times

"Those Who Wish Me Dead is an absolutely thrilling read. I read most of it with my breath held, occasionally exhaling to ask myself, 'What will happen next?' I highly recommend it."
—Kevin Powers, National Book Award Finalist and author of The Yellow Birds

"Reading Michael Koryta is like stepping into fast water. You don't know where the current will take you, only that it's strong and deep and likely to sweep you away. That's what the best fiction does, and Koryta does it better than just about anyone else."—John Hart, author of Iron House

"Absolutely breathtaking, nail-biting, and edge-of-your-seat. Michael Koryta is a master at maintaining suspense and a hell of a good writer. Those Who Wish Me Dead is one of the best chase-and-escape novels you'll read this year - or any other year. The pace never lets up."—Nelson DeMille, author of The Quest

"Michael Koryta isn't just one of the finest authors working in the crime genre today. He's simply one of today's finest authors, period. His stories are taut, compelling, and beautifully rendered. His understanding of human nature-the good, the evil, and all the gray between-is masterful. Those Who Wish Me Dead is Koryta at his best."—William Kent Krueger, author of Ordinary Grace

"Michael Koryta is a fearless stylist...a heart-thumping backwoods adventure that sends two creatively sadistic killers into Montana's Beartooth Mountains, where they spark a monster forest fire to flush out the only witness to their crimes...Koryta rigs his tripwire plot with all sorts of unpredictable characters and unforeseen events, including a "flint-and-steel" electrical storm that will make your hair stand on end. There are any number of hunting parties combing the burning woods for Jace, from the Blackwell brothers to two determined women riding an injured horse. But sitting here, heart in mouth, it sure looks as if that raging forest fire will outrun them all."—Marilyn Stasio, The New York Times Book Review

"Not only does its plot sizzle with one shocking turn after another; it also involves a massive forest fire so vividly described you almost expect the edges of the pages to be scorched...Koryta builds the book's suspense with impressive skill, shifting among different characters' points of view to keep the reader constantly on edge."—Colette Bancroft, Tampa Bay Times

"Michael Koryta is that rare author who is at once a compelling story teller and a fantastic writer. From the first sentence of Those Who Wish Me Dead, you'll be under his spell. His characters are living, breathing people you'll care about; his setting is a place you'll visit and stay -- long after you've decided to leave because you'rescared. You can't leave; you're trapped. There are too many nerve-jangling, beautifully written, razor sharp moments and you won't want to miss a single one. This is an absolute sizzler."—Lisa Unger, author of In the Blood

"Wow! An absolutely first rate novel. More than just an edge-of-your-seat, adrenaline-fueled story of life and death and survival in the Montana wilderness. Those Who Wish Me Dead is what every reader hopes for each time they start a book. A smart, surprising, and emotionally engaging experience that simply does not let up. Ever!"—Christopher Reich, author of Rules of Deception

"This book captured me. Here are two bad guys so bad, so well drawn, that I wanted to avert my eyes--but I didn't want to miss a beat of this sharp thriller. This is a smart big book with what are called twists and turns, but which are really terrific surprises in every deepening layer. Young Jace's journey to survive is a gripping rush. I know not to run in the woods but I wanted to tell him: run, woods or not, just run!"—Ron Carlson, author of The Signal

"Those Who Wish Me Dead is beautifully written, perfectly paced, expertly structured, and simply unputdownable. Koryta is an absolute master."—Deon Meyer, author of Seven Days

"If you want an elegantly written, taut thriller with an amazing sense of place, then look no further.... It's a well-written book..., but it's also a cracking page-turner and a truly immersive experience."—Madhulika Sikka, NPR Books

"This novel is brilliantly orchestrated. Also crucial to its success is Koryta's mastery of the beautiful but threatening setting, including a mountain fire's ability to electrify the ground, radiate a lethal force field-and create otherworldly light shows. Summer reading doesn't get better than this."—Kirkus (starred review)

"Koryta, a widely-praised veteran of cross-genre tales, has upped his game with this stand-alone's seamless blend of western-wilderness thriller and mainstream crime fiction, with a prickly dab of horror...Combine Koryta's existing fan base, the current vogue for wilderness thrillers, and an aggressive marketing campaign, and you get a novel certain to attract a whole lot of eager readers."—Christine Tran, Booklist (starred review)

"More than outstanding, this book will have you jumping from one chapter to another as the fire races across the mountains, as Jace and Hannah try to survive, and while Ethan tries to keep both killers away from Jace...This thriller had me glued to the words, not wanting to do anything else but finish this book. Koryta pens a novel that will leave you gasping along with the characters.This is excellent and one I recommend. Absolutely without a doubt."—Suspense Magazine