The Japanese Art Of The Cocktail (Hardcover) 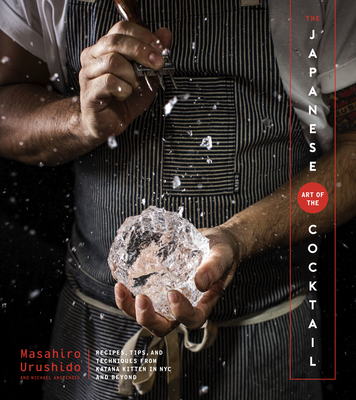 The first cocktail book from the award-winning mixologist Masahiro Urushido of Katana Kitten in New York City, on the craft of Japanese cocktail making

Katana Kitten, one of the world’s most prominent and acclaimed Japanese cocktail bars, was opened in 2018 by highly-respected and award-winning mixologist Masahiro Urushido. Just one year later, the bar won 2019 Tales of the Cocktail Spirited Award for Best New American Cocktail Bar. Before Katana Kitten, Urushido honed his craft over several years behind the bar of award-winning eatery Saxon+Parole. In The Japanese Art of the Cocktail, Urushido shares his immense knowledge of Japanese cocktails with eighty recipes that best exemplify Japan’s contribution to the cocktail scene, both from his own bar and from Japanese mixologists worldwide. Urushido delves into what exactly constitutes the Japanese approach to cocktails, and demystifies the techniques that have been handed down over generations, all captured in stunning photography.

Born in Japan’s Nagano Prefecture and based in New York City, MASAHIRO URUSHIDO is one of the most recognized and beloved unofficial “ambassadors” of Japanese bartending techniques and drinkways in the US. An ace bartender with twenty years of experience, he is managing partner, head bartender, and director of deliciousness at Katana Kitten, a groundbreaking Japanese-American cocktail bar in New York City’s West Village co-created with Cocktail Kingdom Hospitality Group’s Greg Boehm and James Tune.

Michael Anstendig is editor in chief at Hanna Lee Communications, an award-winning, international hospitality and travel PR agency based in New York City. He is also a freelance writer who has reported for the New York Times, New York Observer, Time Out New York, Nation’s Restaurant News, and others. Michael has reviewed more than 200 restaurants for New York magazine’s website and is a contributor to David Wondrich’s Oxford Companion to Spirits and Cocktails. In addition, he co-hosts Hospitality Forward with Hanna Lee, a podcast dedicated to the hospitality and travel industry. Michael is a founding board member of the Museum of Food & Drink (MOFAD).

“Masa has taken the concept of bartending and elevated it into his own unique art form. You will surely enjoy this unforgettable sensory trip.”  —Mike Miyamoto, Suntory Whisky Global Brand Ambassador   “Like the New York bar he joyfully presides over, Katana Kitten, a drinking den that effortlessly balances high and low aesthetics, Masahiro Urushido embodies both the precise artistry of Japanese bartending and the sunny generosity of pure hospitality. He is, in other words, both the diamond and the shine. You couldn’t hope for a better guide through the intricacies and delights of Japan’s many contributions to artful drinking.”  —Robert Simonson, The New York Times     “Masa says he’s obsessed with serving ‘surprises’ to his guests. That’s certainly my experience at Katana Kitten, where the Hinoki Martini arrives cradled in a wooden box, garnished to the hilt, and misted with a final aromatic spritz. He’s delivered the equivalent with this book: These aren’t standard drinks, but surprises, informed by deep dedication to craft and illuminated by Masa’s crinkly megawatt smile.”  —Kara Newman, spirits editor for Wine Enthusiast, and author of Cocktails with a Twist     “A palimpsest if there ever was one, the story of the cocktail has been written, erased, and rewritten on the same sliver of land—Manhattan—for well over a century; and the author before you will leave his mark there, too. Masa Urushido’s improbable journey from Nagano, Japan, to his perch at Katana Kitten on Hudson Street is one of a growing number of influential cross-pollinations between the cocktail cultures of Tokyo and Manhattan that once bred New York bars in Tokyo and Tokyo bars in Manhattan, and has gradually hybridized into an unclassified, genre-defying, Nikkei-like approach to cocktails in each city. If you read this tenderly written, beautifully photographed text by one of America and Japan’s most rightfully beloved bartenders closely, I believe you’ll begin to see a new way of tending bar and mixing drinks emerging—undeniably Japanese, but distinguishably American, too—like a flower blossoming improbably between the tiles of a heavily trodden sidewalk in either town.”  —Jim Meehan, author of Meehan's Bartender Manual and The PDT Cocktail Book     “Masahiro is the best bartender I know. Scratch that, he’s the best bartender any of us know. Ask any bartender who their favorite is, and Masa’s name will always come up first. Every time I’m fortunate enough to be in his presence, I am constantly taking notes in an attempt to be a better bartender myself. In this book, he generously shares with us a few of the tricks that make him the best of the best.”  —Jeffrey Morgenthaler, bar manager of Clyde Tavern, co-author of The Bar Book: Elements of Cocktail Technique and author of Drinking Distilled
— No Source