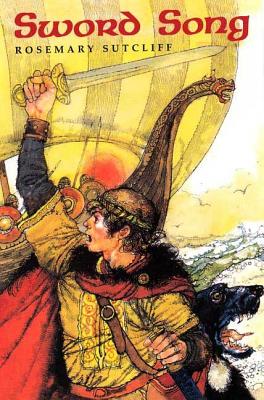 Discovered among Rosemary Sutcliff 's papers after her death in 1992, Sword Song is the swashbuckling epic of a young Viking swordsman, banished from his home for unintentionally killing a man, who takes up a new life as a mercenary.

Rosemary Sutcliff (1920-1992) wrote dozens of books for young readers, including her award-winning Roman Britain trilogy, The Eagle of the Ninth, The Silver Branch, and The Lantern Bearers, which won the Carnegie Medal. The Eagle of the Ninth is now a major motion picture, The Eagle, directed by Kevin MacDonald and starring Channing Tatum. Born in Surrey, Sutcliff spent her childhood in Malta and on various other naval bases where her father was stationed. At a young age, she contracted Still's Disease, which confined her to a wheelchair for most of her life. Shortly before her death, she was named Commander of the British Empire (CBE) one of Britain's most prestigious honors. She died in West Sussex, England, in 1992.

“An action book if there ever was one.” —Kirkus Reviews

“Sutcliff 's careful handling of how a young man, influenced by hero-worship and the force of custom, deals with the difficult choices that lead to maturity is nothing short of masterly. An unexpected and most welcome gift.” —The Horn Book

“Whether Sutcliff is calling up the ale houses of Dublin or the battle-torn moors of Scotland, her descriptive language and dialogue transport readers back to a time and place not usually visited in young people's fiction.” —Booklist