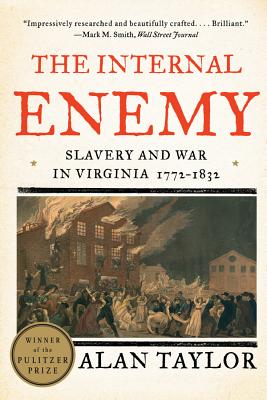 Winner of the Pulitzer Prize for History

Finalist for the National Book Award

"Impressively researched and beautifully crafted…a brilliant account of slavery in Virginia during and after the Revolution." —Mark M. Smith, Wall Street Journal

Frederick Douglass recalled that slaves living along Chesapeake Bay longingly viewed sailing ships as "freedom’s swift-winged angels." In 1813 those angels appeared in the bay as British warships coming to punish the Americans for declaring war on the empire. Over many nights, hundreds of slaves paddled out to the warships seeking protection for their families from the ravages of slavery. The runaways pressured the British admirals into becoming liberators. As guides, pilots, sailors, and marines, the former slaves used their intimate knowledge of the countryside to transform the war. They enabled the British to escalate their onshore attacks and to capture and burn Washington, D.C. Tidewater masters had long dreaded their slaves as "an internal enemy." By mobilizing that enemy, the war ignited the deepest fears of Chesapeake slaveholders. It also alienated Virginians from a national government that had neglected their defense. Instead they turned south, their interests aligning more and more with their section.

In 1820 Thomas Jefferson observed of sectionalism: "Like a firebell in the night [it] awakened and filled me with terror. I considered it at once the knell of the union." The notes of alarm in Jefferson's comment speak of the fear aroused by the recent crisis over slavery in his home state. His vision of a cataclysm to come proved prescient. Jefferson's startling observation registered a turn in the nation’s course, a pivot from the national purpose of the founding toward the threat of disunion. Drawn from new sources, Alan Taylor's riveting narrative re-creates the events that inspired black Virginians, haunted slaveholders, and set the nation on a new and dangerous course.

Alan Taylor has twice won the Pulitzer Prize in History, most recently for The Internal Enemy, also a National Book Award finalist. He is the Thomas Jefferson Foundation Professor of History at University of Virginia, and lives in Charlottesville.

[A]n extraordinary story [told] in vivid prose and compelling, deeply researched detail…[I]t’s hard not to be dazzled by the ease with which [Taylor] moves from the lives of individual slaves…to the national debate over slavery.
— James Oakes - Washington Post

One of the greatest works of American history I have ever read…The elegantly written and carefully researched volume shatters a good deal of received wisdom.
— Stephen L. Carter - Bloomberg View

This is one of the best history books I have read, ever.…[I]t brings an entire period to life in a memorable manner.
— Tyler Cowen - Marginal Revolution

A comprehensive, scholarly work, made accessible by Taylor’s skill as a storyteller.
— Kel Munger - Sacramento Bee

[A] meticulous and insightful account of why runaway slaves…were drawn to the British side as potential liberators.
— Pulitzer Prize citation

Deeply researched and movingly told, The Internal Enemy is a great historian’s masterwork.

The Internal Enemy reinforces Alan Taylor’s standing as our leading historian of colonial and early national America. This deeply researched, beautifully written account of the slaves who sought freedom by escaping to the British during the War of 1812 illuminates a little-known episode in our nation’s past and offers a dramatic instance of the persistent interconnections between American slavery and American freedom.

Alan Taylor has added a remarkable chapter to American history, showing how the actions of black Virginians in the War of 1812 remade the nation’s politics in ways that profoundly influenced the racialized lead-up to the Civil War. Taylor’s meticulous research and crystal-clear prose make this essential reading for anyone seeking new insights into a troubled American past.
— Elizabeth A. Fenn, author of Pox Americana