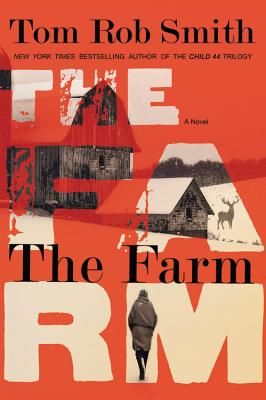 The international bestseller from the author of phenomenal Child 44 trilogy?Ä¶

If you refuse to believe me, I will no longer consider you my son.

Daniel believed that his parents were enjoying a peaceful retirement on a remote farm in Sweden. But with a single phone call, everything changes.

Your mother...she's not well, his father tells him. She's been imagining things - terrible, terrible things. She's had a psychotic breakdown, and been committed to a mental hospital.

Before Daniel can board a plane to Sweden, his mother calls: Everything that man has told you is a lie. I'm not mad... I need the police... Meet me at Heathrow.

Caught between his parents, and unsure of who to believe or trust, Daniel becomes his mother's unwilling judge and jury as she tells him an urgent tale of secrets, of lies, of a crime and a conspiracy that implicates his own father.

International #1 bestselling author Tom Rob Smith graduated from Cambridge University in 2001 and lives in London. His novels in the Child 44 trilogy were New York Times bestsellers and international publishing sensations. Among its many honors, Child 44 won the ITW 2009 Thriller Award for Best First Novel, The Strand Magazine 2008 Critics Award for Best First Novel, the CWA Ian Fleming Steel Dagger Award, and was longlisted for the Man Booker Prize.

"From the very first page, The Farm has all the trappings of a thriller with a deep, dark conspiracy at its heart, but Smith isn't content to stick to formulas. Through a first-person narrative that allows us to view this drama through Daniel's always engaging eyes, he weaves in and out of secrets and truths, sins and redemptions, crafting a thriller that weaves a satisfyingly juicy web of deception and is also an unpredictable page-turner. It's a rare thing to see an author so completely embody the trappings of his genre and also surprise the reader, but Smith achieves it with The Farm. Child 44 fans as well as those looking to get lost in an immersive thriller will find this a gripping read."—BookPage - One of the Ten Best Mysteries and Thrillers 2014

"[A] superior psychological thriller...Smith keeps the reader guessing up to the powerfully effective resolution that's refreshingly devoid of contrivances."—Publishers Weekly (Starred Review) - One of the Top Ten Thrillers of 2014

"This is easily the novel I talked about the most this year and most adamantly pressed into other people's hands. British author Tom Rob Smith is a thriller writer, but of the literary, fiercely smart variety...Smith spins a novel of doubt and secrets set in a bleak yet beautiful Swedish landscape."—Shannon Rhoades, Morning Edition - Selected as one of NPR's 2014 Great Reads

"Smith does an expert job of putting readers into the narrator's uncomfortable shoes."—New York Post

"Tom Rob Smith breathes new life into the landscape, transcending the traditional crime fiction genre with an intricately-knitted thriller steeped in mythology...[Smith] demonstrates the same craftsmanship that saw his highly-acclaimed novel Child 44 claim the Galaxy Book Award for Best New Writer and [be] long-listed for the Manbooker Prize, among its many plaudits. Meticulously weaving together literary themes of revenge and madness...this latest offering is a tapestry of fairytales old and new; so unsettling and oppressive that it blurs the distinctions between sanity and madness, reality and fantasy, leaving the reader guessing until the bitter end."—The Independent (UK)

"The Farm sustains its high dramatic pitch from London to Sweden and back through an immersive and tough-to-predict series of revelations about falsehoods and fantasies."—The Philadelphia Inquirer

"This is a neatly plotted book full of stories within stories, which gradually unravel to confound our expectations...Smith's twisting, turning novel shows that Scandi crime also retains the ability to surprise and thrill."—The Guardian (UK) - One of The Best Crime and Thrillers of 2014

"Tom Rob Smith's The Farm is an absorbing, unsettling, multilayered novel...The Farm is beautifully crafted, its effect enhanced by the author's admission that his own family faced a similar experience."—The Times (UK)

"'Impossible to put down' has become as overused a thing to say about books as the one saying that the people writing them should stick with what they know. In the case of The Farm, it is close to true (I read it in about three sittings and real life felt like an impertinent interruption whenever I had to put it down). Child 44 was one of those rare books that managed to thrill both the Booker judges and the Richard and Judy brigade. The Farm is, perhaps, even better. It is so good, in fact, that you will finish it quickly and then be jealous of anyone who hasn't read it yet."—The Independent (UK)

"A cast-iron premise and a breathtaking opening... Smith has constructed a canny and enthralling story, one that veers off in unexpected ways to complicate and deepen his carefully timed plot. Throughout, he keeps us off-kilter at every turn."—The Seattle Times

"Gripping, atmospheric...This absorbing novel thrives on gradually revealing the intimate details of lives, showing how they become hidden not only from strangers, but from those closest to them. The relationship between parents and children is excellently explored as the author traces the toxic effect of lies and reveals some shocking home truths."—The Observer (UK)

"Chilling, hypnotic and thoroughly compelling. You will not read a better thriller this year."—Mark Billingham, international bestselling author of The Dying Hours

"On rare occasions, an author pulls off the high-wire act of writing a crime-oriented novel that easily transcends the genre. The Farm is one of these...[Smith's] skills are as finely honed as ever, with this tale that's both a page turner and a searing examination of the lives of our protagonist, his lover and his family. Structurally innovative and stylistically resonant, The Farm is a remarkable achievement."—Jeffery Deaver, bestselling author of The Kill Room

"I read this book in two greedy sittings, absolutely and joyfully clueless as to where it was leading. Tom Rob Smith has created a truly original and chilling thriller, which makes you ask yourself 'who would I believe'?"—Jojo Moyes, New York Times bestselling author of Me Before You