Scratching Out a Living: Latinos, Race, and Work in the Deep South (California Series in Public Anthropology #38) (Paperback) 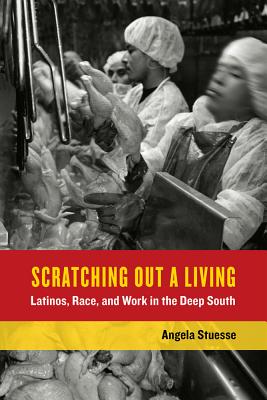 How has Latino immigration transformed the South? In what ways is the presence of these newcomers complicating efforts to organize for workplace justice? Scratching Out a Living takes readers deep into Mississippi’s chicken processing plants and communities, where large numbers of Latin American migrants were recruited in the mid-1990s to labor alongside an established African American workforce in some of the most dangerous and lowest-paid jobs in the country. As America’s voracious appetite for chicken has grown, so has the industry’s reliance on immigrant workers, whose structural position makes them particularly vulnerable to exploitation.

Based on the author’s six years of collaboration with a local workers’ center, this book explores how Black, white, and new Latino Mississippians have lived and understood these transformations. Activist anthropologist Angela Stuesse argues that people’s racial identifications and relationships to the poultry industry prove vital to their interpretations of the changes they are experiencing. Illuminating connections between the area’s long history of racial inequality, the industry’s growth and drive to lower labor costs, immigrants’ contested place in contemporary social relations, and workers’ prospects for political mobilization, Scratching Out a Living paints a compelling ethnographic portrait of neoliberal globalization and calls for organizing strategies that bring diverse working communities together in mutual construction of a more just future.

"Scratching Out a Living is a model of engaged scholarship. In this timely, beautifully-written, and deeply researched activism-based ethnography about the poultry industry in the American South, Stuesse demonstrates how workers are exploited and divided on the basis of racial and ethnic identities within the context of neoliberal globalization. Without underestimating the difficulties, her research reveals that the basis for inter-racial working class solidarity among African Americans and Latinos does indeed exist in the newest 'new' South." —Judges' Comments, 2017 C.L.R. James Award for Published Books for Academic or General Audiences
— Working-Class Studies Association

"Through robust ethnographic vignettes, nuanced historical context, and thoughtful analysis, Stuesse paints a vivid picture of Latinx, Black, and white worker’s lives both inside and outside of Mississippi chicken processing plants. . . . Stuesse pushes the boundaries of what it means to engage in applied research and for whom our research benefits."
— City & Society