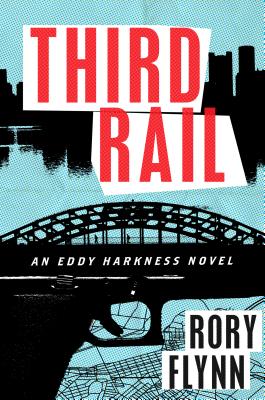 This is book number 1 in the Eddy Harkness Novels series.

"Third Rail gets off to a ripping start and never lets off the gas." —Jess Walter, author of Beautiful Ruins

At crime scenes, Eddy Harkness, the "Harvard Cop," is a human Ouija board, a brilliant young detective with a knack for finding the hidden something—cash, drugs, guns, bodies. Harkness's swift rise in an elite narcotics unit is derailed by the death of a young Red Sox fan in the chaos after a World Series win, a death some camera-phone-wielding witnesses believe he could have prevented. Scapegoated, Eddy is exiled to his hometown, Nagog, just outside Boston, where he empties parking meters and struggles to redeem his disgraced family name.

But one night Harkness’s police-issued Glock disappears. Harkness starts a search—just as a string of fatal accidents in Nagog lead him to uncover a dangerous new smart drug, Third Rail. With only a plastic gun to protect him, Harkness begins a high-stakes investigation that sends him into the darkest corners of the city.

One of the most electrifying thrillers you'll read this year, Third Rail takes you deep into a gritty world of wronged heroes, corrupt politicians, and sinister kingpins, where your friends can't be trusted, a sleepy town breeds deadly crimes, and nothing ever happens by accident.

RORY FLYNN lives in Boston, Massachusetts. He is the author of the Eddy Harkness series, which debuted with Third Rail.

"Already compelling plot-wise, Third Rail also glows with the kind of sawdust-dry humor regarding Beantown, cops, and the darkest of urban underbellies that you might find at 3 a.m. in the back booth of a backstreet bar…With its gaggle of crazy-yet-riveting characters, its spare approach and its unflagging action, Third Rail, the first in a promised series of Eddy Harkness novels, adds yet another striking feather to [Rory Flynn]’s impressively-crowded cap." —Boston Globe

"Third Rail gets off to a ripping start and never lets off the gas. Rory Flynn is a suspense writer to watch." —Jess Walter, author of the bestselling Beautiful Ruins

“Third Rail is an adrenaline-soaked tale of political corruption and personal redemption that never lets up. Eddy Harkness, the self-destructive Massachusetts narcotics detective at the novel’s center, is a worthy successor to Robert B. Parker’s Jesse Stone.” —Sean Chercover,  author of the bestselling The Trinity Game

"Third Rail is driven equally by character and plot. Harkness's Nagog is faintly reminiscent ofFargo (the film or television series, take your pick). It is populated by quirky characters, some of whom are dangerous to others, others who are dangerous only to themselves." —Book Reporter

"The start to a successful crime writing career." —Library Journal