Will My Name Be Shouted Out (Paperback) 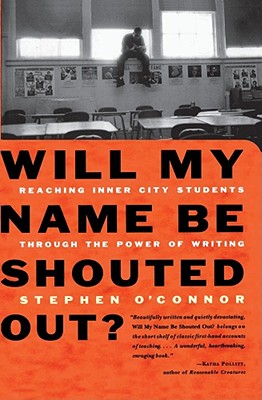 A writing instructor at a New York City junior high school traces his attempts to educate youngsters from broken homes and violent neighborhoods.

Putting a human face on dire statistics about inner-city schools, Stephen O'Connor describes how his junior high school students--struggling to make sense of lives touched by violence, poverty, and broken families--discovered their own voices by writing and performing two plays.

Stephen O’Connor is the author of three books: Rescue (a collection of short fiction and poetry), Will My Name Be Shouted Out? (a work of memoir and social analysis), and Orphan Trains: The Story of Charles Loring Brace and the Children He Saved and Failed (a narrative history). His fiction has appeared in The New Yorker, Conjunctions, The Quarterly, Partisan Review, The New England Review, and elsewhere. His poetry has been in Poetry Magazine, The Missouri Review, Agni, Knockout, and Green Mountains Review. His essays and journalism have appeared in The New York Times, The Nation, The Chicago Tribune, The Boston Globe, and elsewhere.

O’Connor is the recipient of the Cornell Woolrich Fellowship in Creative Writing from Columbia University, the Visiting Fellowship for Historical Research by Artists and Writers from the American Antiquarian Society, and the DeWitt Wallace/Reader's Digest Fellowship from the MacDowell Colony. He teaches in the writing MFA programs of Columbia University and Sarah Lawrence. For eight years he directed and taught in Teachers & Writers Collaborative’s flagship creative writing program at a public school in New York City. He has received a B.A. from Columbia University, and an M.A. from the University of California at Berkeley, both in English literature. He lives with his wife and daughter in New York City.