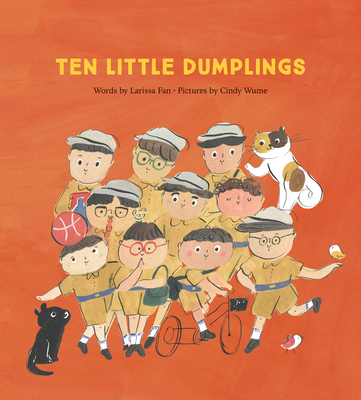 Ten stars for TEN LITTLE DUMPLINGS! It has everything you could ask for in a picture book—charm, myth, whimsy, and even a little twist that makes this delightful story of family even sweeter.

If one son is lucky, then ten must be great luck indeed! But where does that leave an only daughter? Based on a true family story, this inspiring picture book about a different perspective tells the tale of a girl determined to be seen, who finds her own voice and makes her own luck.

In the city of Fengfu, there lives a very special family -- special because they have ten sons who do everything together. Their parents call them their ten little dumplings, as both sons and dumplings are auspicious. But if you look closely, you'll see that someone else is there, listening, studying, learning and discovering her own talent -- a sister. As this little girl grows up in the shadow of her brothers, her determination and persistence help her to create her own path in the world . . . and becomes the wisdom she passes on to her own daughter, her own little dumpling.

Based on a short film made by the author, inspired by her father's family in Taiwan, Ten Little Dumplings looks at some unhappy truths about the place of girls in our world in an accessible, inspiring and hopeful way.

LARISSA FAN is an artist and writer whose short films have screened at festivals worldwide. She studied at the Ontario College of Art and Design University and has an MFA in Film Production from York University. Larissa grew up with three brothers and competes with them as to who can make the best dumplings. Ten Little Dumplings is her first picture book. She lives in Toronto, Canada.

CINDY WUME is an illustrator and picture book maker. She completed an MA in Children's Book Illustration at Cambridge School of Art at 2016. Her debut picture book The Best Sound in the World was published in 2018, and her work has been exhibited at the Bologna Children's Book Fair. This story is special to her because she also believes women can be great dumplings. Cindy lives in Taipei, Taiwan.

One of FOLD Kids Book of the Month Picks (January Picture Book)
One of CCBC’s Best Books for Kids and Teens, Fall 2021 — Starred Pick

“Stepping out of the shadows: a gentle, persuasive #ownvoices take on a hitherto-untold perspective.” —STARRED REVIEW, Kirkus Reviews

“A sincere and beautiful story for all ages, and one that can gently introduce a serious discussion topic of rank and gender for older readers.” —STARRED REVIEW, School Library Journal

“Infused not with grievance but with redemptive joy, this is a book to cheer the heart of any child who’s ever felt overshadowed by a dazzling sibling — or by 10 of them.” —Wall Street Journal

“Fan has created a heroine who is quiet and observant, seemingly willing to conform, but all the time building up her own strength and conviction . . . Do not miss this book!” —Imaginary Elevators

“This book beautifully uses the frame of a traditional tale to give little sister her voice back.” —the Globe and Mail

“The book’s final image of the grown-up daughter sitting with her own child, also a daughter, evokes a positive representation of female lineage and empowerment.” —CM Magazine

"In cultures that prized sons, [Fan] wonders, 'who is left out of the stories we tell and why?'" —World