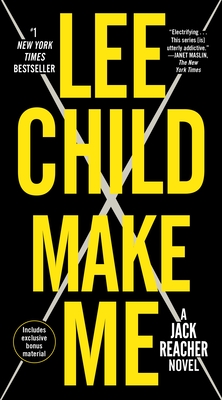 This is book number 20 in the Jack Reacher series.

ONE OF THE BEST BOOKS OF THE YEAR: Los Angeles Times, The Guardian, Suspense magazine • Stephen King calls Jack Reacher “the coolest continuing series character”—and now he’s back in this masterly new thriller from Lee Child.

“Why is this town called Mother’s Rest?” That’s all Reacher wants to know. But no one will tell him. It’s a tiny place hidden in a thousand square miles of wheat fields, with a railroad stop, and sullen and watchful people, and a worried woman named Michelle Chang, who mistakes him for someone else: her missing partner in a private investigation she thinks must have started small and then turned lethal.

Reacher has no particular place to go, and all the time in the world to get there, and there’s something about Chang . . . so he teams up with her and starts to ask around. He thinks: How bad can this thing be? But before long he’s plunged into a desperate race through LA, Chicago, Phoenix, and San Francisco, and through the hidden parts of the internet, up against thugs and assassins every step of the way—right back to where he started, in Mother’s Rest, where he must confront the worst nightmare he could imagine.

Walking away would have been easier. But as always, Reacher’s rule is: If you want me to stop, you’re going to have to make me.

Lee Child is the author of twenty New York Times bestselling Jack Reacher thrillers, eleven of which have reached the #1 position. All have been optioned for major motion pictures; the first, Jack Reacher, was based on One Shot. Foreign rights in the Reacher series have sold in almost a hundred territories. A native of England and a former television director, Lee Child lives in New York City.

“Lee Child’s Reacher series has hit Book No. 20 with a resounding peal of wisecracking glee. Everything about it, starting with Reacher’s nose for bad news, is as strong as ever. . . . The big guy’s definitely on the upswing. The guy who writes about him is too.”—Janet Maslin, The New York Times

“Lee Child has another winner with Make Me. . . . There’s a reason why Child is considered the best of the best in the thriller genre: He can take all these strange elements and clichés and make them compelling and original.”—Associated Press

“I’ve read all twenty of Lee Child’s novels. Maybe there’s something wrong with me. But I can’t wait for the twenty-first.”—Malcolm Gladwell, The New Yorker

“[The Reacher series] is the current gold standard in the genre. . . . In Make Me Lee Child delivers another Jack Reacher specialty; the total knockout.”—Dayton Daily News

“Child serves up wingding plots, pithy dialogue, extraordinary background on intriguing topics, and cunningly constructed suspense. But what keeps us coming back—by the millions—is the chance to walk around in the skin of that big guy in the middle of everything.”—The Oregonian

“Jack Reacher is back. . . . Readers new to this series will find this book a good starting point, and fans will be pleased to see Jack again.”—LibraryReads (Top Ten Pick)

“The reigning champ ups the ante. . . . Yes, there’s breakneck action, but what gives this one its zing is the multilayered plot. . . . The beguiling Chang offers a new treat for series fans as well, and a surprise at the end will keep readers short of breath until the next installment begins.”—Booklist (starred review)

“This series remains as compulsively readable as ever. Child is a master of pacing, stretching out the mystery through short chapters that give rise to bursts of well-choreographed violence. . . . Of course, the biggest strength is Reacher himself: impassive, analytical, secretly romantic, and relentlessly honorable. It’s impossible not to root for him. . . . Reacher is still going strong. Will satisfy fans—and newcomers, too.”—Kirkus Reviews