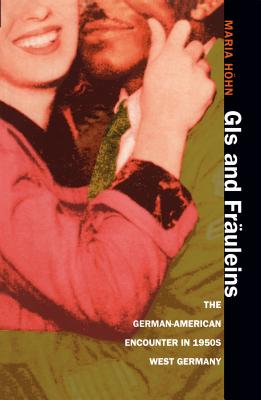 With the outbreak of the Korean War, the poor, rural West German state of Rhineland-Palatinate became home to some of the largest American military installations outside the United States. In GIs and Frauleins, Maria Hohn offers a rich social history of this German-American encounter and provides new insights into how West Germans negotiated their transition from National Socialism to a consumer democracy during the 1950s.

Focusing on the conservative reaction to the American military presence, Hohn shows that Germany's Christian Democrats, though eager to be allied politically and militarily with the United States, were appalled by the apparent Americanization of daily life and the decline in morality that accompanied the troops to the provinces. Conservatives condemned the jazz clubs and striptease parlors that Holocaust survivors from Eastern Europe opened to cater to the troops, and they expressed scorn toward the German women who eagerly pursued white and black American GIs. While most Germans rejected the conservative effort to punish as prostitutes all women who associated with American GIs, they vilified the sexual relationships between African American men and German women. Hohn demonstrates that German anxieties over widespread Americanization were always debates about proper gender norms and racial boundaries, and that while the American military brought democracy with them to Germany, it also brought Jim Crow.

Maria Hohn is associate professor of history at Vassar College.