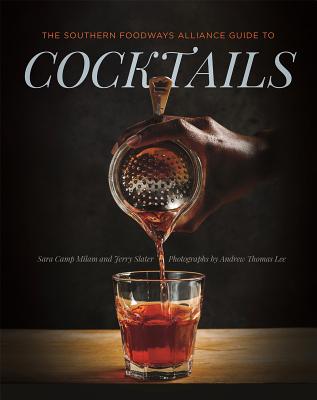 The South's relationship with drinking is complicated. Although religious and legal mandates discourage the sale and consumption of alcohol, the region has a robust drinking culture. As the home of NASCAR, a sport that arose from the high-speed antics of bootleggers, and Tennessee Williams, a man notorious for both his literary genius and his propensity to imbibe, the Bible Belt has a booze-soaked background. In the recipes and essays in The Southern Foodways Alliance Guide to Cocktails, Jerry Slater and Sara Camp Milam and their cocktail cabinet of contributors bridge the gaps between the culture, history, and practice of drinking in the South.

Nearly one hundred easy-to-follow recipes instruct the home bartender how to create memorable drinks, whether they be light tipples or potent bell ringers. Milam and Slater organize their historical how-to by drink family, starting with day-drinking classics suitable for brunches and tailgating, such as the Michelada and the Ruby Slipper. Variations on the French 75, lovingly lauded by food writer Kat Kinsman, and various juleps, cobblers, and sours are also covered, as are strong finishes such as the Sazerac and the Vieux Carr . A final set of recipes focuses on the punch bowl, with instructions on how to mix such shareable libations as Chatham Artillery Punch and Watermelon Sangria. Milam and Slater also share information on essential tools and glassware with which to stock the home bar, as well as mixing and garnishing techniques. In addition, the book contains fifteen fun and informative essays on drink culture, including a profile of white whiskey whisperer Marvin "Popcorn" Sutton by historian Mark Essig, a piece on the kitschy pleasure of collecting figurative decanters by syndicated OC Weekly and Ask a Mexican columnist Gustavo Arellano, and an essay by the dean of cocktail history, David Wondrich, on "The Future of Southern Drinking." Lest we drink on an empty stomach, recipes for cocktail bites are provided by multiple James Beard Award nominee Vishwesh Bhatt. The Oxford, Mississippi-based Snackbar chef shares recipes for Benedictine Spread, Catfish Rillettes, Deviled Pickled Eggs, Deviled Ham, Okra Chaat, Pickled Shrimp, Shrimp Toast, Snackbar Pimento Cheese, Sweet Potato Biscuits with Pear Jam, and Spicy, Crunchy Black-Eyed Peas.

Sara Camp Milam (Author) SARA CAMP MILAM is the Southern Foodways Alliance's managing editor. She lives in Oxford, Mississippi. Jerry Slater (Author) JERRY SLATER has extensive experience in hospitality and management and has gained critical accolades for his beverage programs at such venues as the Oakroom at the Seelbach Hotel, One Flew South, and H. Harper Station. He lives in Bostwick, Georgia.