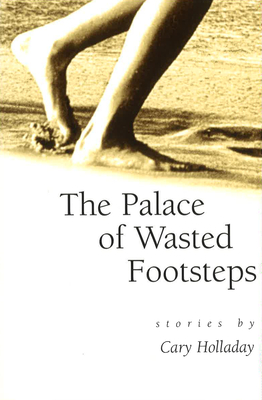 Images of dancing and the theme of survival connect the stories in Cary Holladay's latest fiction collection, The Palace of Wasted Footsteps. These images may be explicit, or understated, as in "Mayflies," which suggests the glorious yet frantic dance of brief, intense lives. Yet each story depicts men, women, and children partnered with death, love, or strange, wonderful chance.

Set largely in the Mid-South, Holladay's stories feature characters with honest, even old-fashioned, sensibilities who set out to do right and end up smitten. The policeman in "Doll" discovers that his affection is torn between his pregnant wife, a mannequin he found in a dump, and a haughty saleswoman whose smile is like "a cat's yawn." The young woman in "Runaways," bedazzled by the vanished hot-air balloonist who was her best friend's father, creates a loving legend about him that inspires and sustains her.

Darker in subject matter and atmosphere, "Merry-Go-Sorry" captures an ironic theme that is carried throughout the collection. "Merry- go-sorry. It means a story with good news and bad . . . smacking you in the face at the same time." Centering on a small Arkansas town in the aftermath of a triple murder, the story follows the effects of three boys' deaths on the lives of their parents, friends, and accused killers. Despite the sorrow felt throughout the community, one girl finds solace in her new baby and in the Bible verses she readily quotes.

"Rapture," the story of a young woman who has lost her family and her home, again captures the essence of both joy and sorrow. When a friend gives her a small glass egg, Etta is suddenly confronted with memories of her youth and her beloved family. Although buried woes emerge, she is also filled with newfound contentment: "Tourists waved. To her surprise, her hand flew up; she was waving back."

The rituals, struggles, and triumphs that the various characters in The Palace of Wasted Footsteps experience are personal yet universal. At the same time, they capture the subtle echoes of the American South and its literary tradition. Like glorious mayflies, Holladay's characters are forever enthralled in the frantic dance of life—their passions are strong, their fates inevitable.

Cary Holladay is the winner of several literary prizes, including the O. Henry Short Story Contest and the American Literary Review fiction contest. She is the author of the acclaimed short-story collection The People Down South.

"Holladay's themes are contemporary and timeless: longing and love; loss and the refusal to give in to it . . . the crucial importance of what we call the little things in our lives."—Dabney Stuart