How to Tell Toledo from the Night Sky: A Novel (Hardcover) 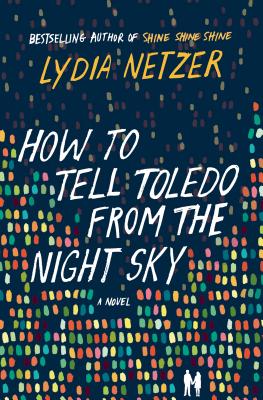 Here she goes again. Lydia Netzer has written another stellar, sweeping love story that isn't like any you've ever read. This book is a mystery; it's a magical conglomeration of astronomy & astrology, super colliders and reading tea leaves. HOW TO TELL TOLEDO FROM THE NIGHT SKY is about the most bizarre arranged marriage you've ever heard of along with a tragic unrequited love story. Like her characters Irene and George, Lydia Netzer is a dreamer. I'm so very thankful.

“This is a quirky, geeky, wonderful, feel-good love story unlike anything you have ever read. It has poetry, black holes, dreams, astronomy, super-colliders, psychics, destiny, unrequited love, and the strangest pre-arranged marriage you will ever see. It goes from weird to serious and from funny to sad, but in the end Netzer's latest is an honest and emotional look at the nature of true love.”
— Nancy McFarlane, Fiction Addiction, Greenville, SC

Lydia Netzer, the award-winning author of Shine Shine Shine, weaves a mind-bending, heart-shattering love story that asks, "Can true love exist if it's been planned from birth?"

Like a jewel shimmering in a Midwest skyline, the Toledo Institute of Astronomy is the nation's premier center of astronomical discovery and a beacon of scientific learning for astronomers far and wide. Here, dreamy cosmologist George Dermont mines the stars to prove the existence of God. Here, Irene Sparks, an unsentimental scientist, creates black holes in captivity.

George and Irene are on a collision course with love, destiny and fate. They have everything in common: both are ambitious, both passionate about science, both lonely and yearning for connection. The air seems to hum when they're together. But George and Irene's attraction was not written in the stars. In fact their mothers, friends since childhood, raised them separately to become each other's soulmates.
When that long-secret plan triggers unintended consequences, the two astronomers must discover the truth about their destinies, and unravel the mystery of what Toledo holds for them—together or, perhaps, apart.

Lydia Netzer combines a gift for character and big-hearted storytelling, with a sure hand for science and a vision of a city transformed by its unique celestial position, exploring the conflicts of fate and determinism, and asking how much of life is under our control and what is pre-ordained in the heavens in her novel How to Tell Toledo from the Night Sky.

LYDIA NETZER lives in Virginia with her husband and two redheaded children. She is the author of How to Tell Toledo from the Night Sky and Shine Shine Shine, a NYT Notable Book and a finalist for the LA Times Book Prize.

“[A] winning second novel…two flawed souls whose love is as quarky as it is quirky…showing us the redemptive power of love as a truly cosmic force.” —The Boston Globe

“A genuinely moving love story at its core, with the added bonus of humor that is sweet and almost soul touching.” —Bookriot Round-Up

“Netzer's sophomore effort may be even stronger than her excellent debut. Readers will be unable to stop thinking about this book, stunning in its poignancy, long after the last page has been read.” —RT Book Reviews "Top Pick" (4.5 stars)

“With a title that reads like a line of verse, the novel's mesmerizing cadence is little surprise. There is a deeper poetry to Netzer's writing, as well. Netzer exposes the magic in the mundane, the enchantment of the earthbound. Her characters, like us, share space with the stars. Perhaps the most breathtaking revelation of Netzer's novel is that the world is more dazzling on our side of the atmosphere.” —Minneapolis Star Tribune

“Netzer's star burst into existence with Shine Shine Shine and flares even more brightly in How to Tell Toledo From the Night Sky. Watch her work for further illumination, and pity lesser writers who settle for the commonplace light of ordinary days.” —Richmond Times Dispatch

“No one writes like the brilliant Lydia Netzer; she's a visionary with a huge voice and an impeccable ear for language. How to Tell Toledo from the Night Sky evokes an Ohio where math has married mysticism, where a woman at war with falling in love can find herself flying into it instead, where a man will fight both his demons and his deities to finally connect. It's a powerful reinvention of the love story---sometimes heart-wrenching, sometimes glorious, but always truly original. Compelling, rich with ideas, and perfectly written, it left me breathless. I love this book, and you will, too.” —Joshilyn Jackson, New York Times bestselling author of A Grown Up Kind of Pretty

“Lydia Netzer has a refreshing way of looking at the world that captivates me--it's as if she's leading me to a grassy hill far from the lights of a noisy city and there we lie on our backs, hands behind our heads, and stare at the star-pricked night sky in wide-eyed wonder. In her novels, she combines math, magic, and science in a unique alchemy that gives us an entirely new kind of love story. In How to Tell Toledo From the Night Sky, she writes about "twin souls who collide and love each other forever." I urge you, dear reader, to collide with this book. It may just change the way you think about love.” —David Abrams, author of Fobbit