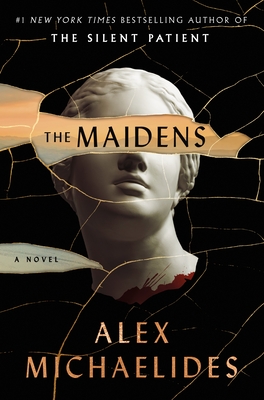 “Alex Michaelides approaches The Maidens with a skillful hand and an eye for the mystery/thriller novel while expertly intertwining dark academia and psychological influences. This is one that will keep you invested until the very end.”
— Maxwell Leaning, Paragraphs Bookstore, Mount Vernon, OH

"Alex Michaelides’s long-awaited next novel, 'The Maidens,' is finally here...the premise is enticing and the elements irresistible."
—The New York Times

"A deliciously dark, elegant, utterly compulsive read—with a twist that blew my mind. I loved this even more than I loved The Silent Patient and that's saying something!"
—Lucy Foley, New York Times bestselling author of The Guest List

From the #1 New York Times bestselling author of The Silent Patient comes a spellbinding tale of psychological suspense, weaving together Greek mythology, murder, and obsession, that further cements “Michaelides as a major player in the field” (Publishers Weekly).

Edward Fosca is a murderer. Of this Mariana is certain. But Fosca is untouchable. A handsome and charismatic Greek tragedy professor at Cambridge University, Fosca is adored by staff and students alike—particularly by the members of a secret society of female students known as The Maidens.

Mariana Andros is a brilliant but troubled group therapist who becomes fixated on The Maidens when one member, a friend of Mariana’s niece Zoe, is found murdered in Cambridge.

Mariana, who was once herself a student at the university, quickly suspects that behind the idyllic beauty of the spires and turrets, and beneath the ancient traditions, lies something sinister. And she becomes convinced that, despite his alibi, Edward Fosca is guilty of the murder. But why would the professor target one of his students? And why does he keep returning to the rites of Persephone, the maiden, and her journey to the underworld?

When another body is found, Mariana’s obsession with proving Fosca’s guilt spirals out of control, threatening to destroy her credibility as well as her closest relationships. But Mariana is determined to stop this killer, even if it costs her everything—including her own life.

Alex Michaelides was born and raised in Cyprus. He has an M.A. in English Literature from Trinity College, Cambridge University, and an M.A. in Screenwriting from the American Film Institute in Los Angeles. The Silent Patient was his first novel. It spent more than a year on the New York Times bestseller list and sold in a record-breaking fifty countries. He lives in London.

"Alex Michaelides’s long-awaited next novel, 'The Maidens,' is finally here...the premise is enticing and the elements irresistible."
—The New York Times

"Fans of The Secret History will fall hard for The Maidens, Michaelides’ dazzling chaser to 2019’s bestselling The Silent Patient, a challenging act to follow...Layered in dreamlike references to Greek mythology and ancient ritualized murders, this clever literary page-turner firmly establishes Michaelides as an unstoppable force in the thriller space."
—Esquire

"Elegant, sinister, stylish and thrilling, The Maidens answers the weighty question, how do you go about following one of the biggest thrillers of the past decade? You write something even better."
—Chris Whitaker, New York Times bestselling author of We Begin at the End

"The author of the critically acclaimed The Silent Patient permanently cements himself as a top modern author with this new work, a masterful, slow burn blend of Greek mythology and a knife-edged plot...destined for the bestseller list."
—Newsweek

"Michaelides’ stage-setting skills are as masterful here, as they were in The Silent Patient (2019); another tense, cleverly twisted winner."
—Booklist, starred review

"Michaelides has proven that he is no one-hit wonder and is well on his way to becoming one of the world’s most influential and well-read thriller writers."
—Bookreporter.com

"Stunning... The intelligent, cerebral plot finds contemporary parallels in Euripides's tragedies, Jacobean dramas such as The Duchess of Malfi, and Tennyson's poetry. The devastating ending shows just how little the troubled Mariana knows about the human psyche or herself. Michaelides is on a roll."
—Publishers Weekly, starred review

"Tautly plotted and impeccably paced, it's an intelligent and propulsive second novel."
—The Observer

"Enticingly dark and compulsively pageturning, this chilling novel takes readers on a suspenseful journey that's both terrifying and twisted... If you liked The Silent Patient, then you already know Michaelides's new book will be up your alley. With similar page-turning cliff-hangers, this utterly compulsive read will make you question which book you like better."
—PopSugar

"Fans of The Silent Patient will love The Maidens... Set in the world of academia, it features Greek mythology, multiple murders and a twist that made my jaw hit the floor."
—Riley Sager, Parade Magazine

"A deliciously dark, elegant, utterly compulsive read—with a twist that blew my mind. I loved this even more than I loved The Silent Patient and that's saying something!"
—Lucy Foley, New York Times bestselling author of The Guest List

"Alex Michaelides hits a home run in his sophomore effort. The Maidens is a page-turner of the first order."
—David Baldacci

"The Maidens is an intricately plotted, mystery-thriller for the discerning reader. It’s an atmospheric story set on Cambridge University’s campus merging cliff-hanging twists with artful suspense."
—The New York Journal of Books

"Combining Greek mythology with propulsive suspense, this gripping, twisty tale is the perfect way to start off your summer reading with a bang."
—Book Riot