Aru Shah and the End of Time (Graphic Novel, The) (Pandava Series) (Hardcover) 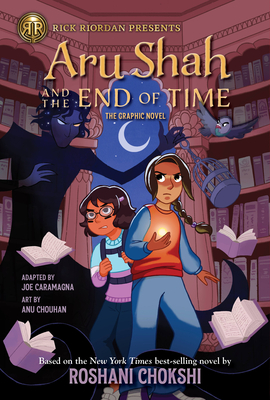 Aru Shah is a pitch-perfect, rip-roaring adventure from start to finish. Full of snarky gods and sneaky demons and amazing mythical creatures, this novel envelops readers in the rich world of Hindu mythology and mixes in a whole lot of girl power. Our heroines are flawed and relatable, despite being reincarnations of divine heroes--every reader will be rooting for Aru and Mini!

“Roshani Chokshi's foray into middle grade books is a fast-paced, thrilling quest bringing together Hindu gods with a character I loved deeply. Aru Shah is the perfectly imperfect heroine every middle grader needs. She's not rich, she's messy, she makes up stories to make her life seem better. But not even she can imagine that lighting the lamp her mother forbade her to touch would send her on the adventure of a lifetime. This is the perfect companion for lovers of Rick Riordan. In the first 100 pages alone, I laughed out loud multiple times. This book is a winner for all ages.”
— Shauna Sinyard, Park Road Books, Charlotte, NC

Best-selling author Rick Riordan Presents the graphic novel adaptation of the New York Times best-selling fantasy adventure by Roshani Chokshi, inspired by the great Hindu epics she grew up on.

Named one of 100 Best Fantasy Books of All Time by Time magazine!

Twelve-year-old Aru Shah has a tendency to stretch the truth in order to fit in at school. While her classmates are jetting off to family vacations in exotic locales, she'll be spending her autumn break at home, in the Museum of Ancient Indian Art and Culture, waiting for her mom to return from her latest archeological trip. Is it any wonder that Aru makes up stories about being royalty, traveling to Paris, and having a chauffeur?

One day, three schoolmates show up at Aru's doorstep to catch her in a lie. They don't believe her claim that the museum's Lamp of Bharata is cursed, and they dare Aru to prove it. Just a quick light, Aru thinks. Then she can get herself out of this mess and never ever fib again.

But lighting the lamp has dire consequences. She unwittingly frees the Sleeper, an ancient demon whose duty it is to awaken the God of Destruction. Her classmates and beloved mother are frozen in time, and it's up to Aru to save them.

The only way to stop the demon is to find the reincarnations of the five legendary Pandava brothers, protagonists of the Hindu epic poem, the Mahabharata, and journey through the Kingdom of Death. But how is one girl in Spider-Man pajamas supposed to do all that?

This hilarious and inventive fantasy is perfect for the graphic novel format.

Joe Caramanga (adapter) is a writer and Harvey and Eisner-Award nominated comic book creator who has worked for both Disney Comics and Disney Games and Interactive Experiences. He has been involved with Duck Tales, Frozen, Big Hero6, and more. He is also a letterer for Marvel. He's from Elmwood Park, New Jersey, and loves his wife, three children, hockey, and donuts, though not always in that order. Follow him on Twitter @JoeCaramagna.

Anu Chouhan (artist) is a Punjabi illustrator from Vancouver BC, Canada. Growing up, she always knew she wanted to pursue a career in art and spent a lot of time learning about animation and fashion, while drawing inspiration from video games, movies (especially Bollywood), and nature. After completing her BA and earning a diploma in commercial animation, she worked as a mobile game artist for several years before going out on her own as a freelancer. Her unique edgy and energetic art has garnered attention on social media from major publications, celebrities, and influencers. Follow her on Instagram @anumation and on Twitter @anumationart.