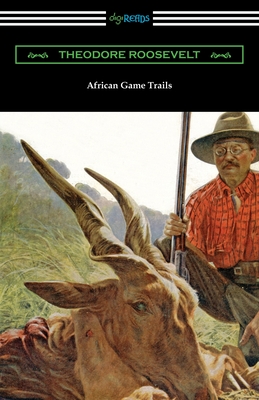 While he is best known for being the 26th President of the United States, Theodore Roosevelt is also remembered for his immense love of nature, animals, and game hunting. "African Game Trails" is Roosevelt's memoirs about a hunting trip to Africa that he took with his son Kermit in 1908. In the text, he vividly describes the country in exotic detail, depicting the enthusiastic thrill of the hunt, as well as the beauty of the animals he tracked. He also portrays his interactions with other famous game hunters such as Major Boyd Cunningham and Frederick Selous, who is known as one of the last big game hunters in Africa. As a naturalist, Roosevelt was immensely interested in the native flora and fauna of East Africa. He included descriptions of fascinating plants and animals that are only found on the continent, introducing the natural landscape of Africa to readers who had never seen it. Roosevelt was a firm believer in portraying wildlife as naturally as possible; he even wrote a number of essays denouncing anthropomorphism in literature. He wanted his works to be as realistic and life-like as possible, so that "African Game Trails" is a true representation of the beauty and majesty that Roosevelt saw during his trip to East Africa. His adventures in the untamed jungles of the continent are as thrilling now as they were when the book was first published in the early twentieth century. This edition is printed on premium acid-free paper.