The Time In Between: A Novel (Paperback) 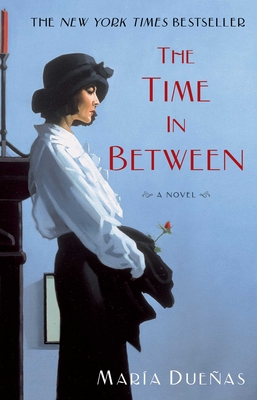 The inspiring international bestseller of a seemingly ordinary woman who uses her talent and courage to transform herself first into a prestigious couturier and then into an undercover agent for the Allies during World War II.

Between youth and adulthood...

At age twelve, Sira Quiroga sweeps the atelier floors where her single mother works as a seamstress. At fourteen, she quietly begins her own apprenticeship. By her early twenties she has learned the ropes of the business and is engaged to a modest government clerk. But everything changes when two charismatic men burst unexpectedly into her neatly mapped-out life: an attractive salesman and the father she never knew.

Between war and peace...

With the Spanish Civil War brewing in Madrid, Sira leaves her mother and her fiancé, impetuously following her handsome lover to Morocco. However, she soon finds herself abandoned, penniless, and heartbroken in an exotic land. Among the odd collection of European expatriates trapped there by the worsening political situation back on the Continent, Sira reinvents herself by turning to the one skill that can save her: her gift for creating beautiful clothes.

Between love and duty...

As England, Germany, and the other great powers launch into the dire conflict of World War II, Sira is persuaded to return to Madrid, where she takes on a new identity to embark upon the most dangerous undertaking of her career. As the preeminent couturier for an eager clientele of Nazi officers’ wives, Sira becomes embroiled in the half-lit world of espionage and political conspiracy rife with love, intrigue, and betrayal.

An outstanding success around the world, The Time in Between has sold more than two million copies and inspired the Spanish television series based on the book, dubbed by the media as the “Spanish Downton Abbey.” In the US it was a critical and commercial hit, and a New York Times bestseller in paperback. It is one of those rare, richly textured novels that enthrall down to the last page. María Dueñas reminds us how it feels to be swept away by a masterful storyteller.

María Dueñas holds a PhD in English philology. After two decades in academia, she broke onto the literary scene in 2009 with the publication of the New York Times bestselling novel The Time in Between, followed by The Heart Has Its Reasons in 2012. Both novels became international bestsellers and have been translated into thirty-five languages. The television adaptation of The Time in Between earned critical and international acclaim. The Vineyard is her third novel.

"A wonderful novel, in the good old tradition, with intrigue, love, mystery and tender, audacious and well-drawn characters."
— Mario Vargas Llosa, recipient of the 2010 Nobel Prize in Literature

"The Time in Between is an epic novel with an unlikely Spanish heroine, Sira Quiroga, that takes us through one of the most turbulent times in Europe: the onset of World War II. Sira travels on a journey through romance, love, loss, and intrigue, all while discovering traits that she never dreamed she had. I couldn't turn the pages fast enough, and once I reached the end, I couldn't wait to start it all over again!"
— Daisy Martinez, author of Daisy: Morning, Noon and Night and Daisy's Holiday Cooking

“Maria Dueñas is a true storyteller. She weaves a spell, conjuring the heat and the glamour, the hardship and the thrill of Morocco and Spain in the late 1930s. The world of Casablanca comes to life as war breaks and Sira Quiroga, a beautiful and betrayed seamstress, is forced to discover her own strength. At a time when everyone must do what they can to survive, some will go beyond. Resistance will be formed and history will be written. Read this book and prepare to be transported.”
— Kate Morton, New York Times bestselling author of The Distant Hours

"Engaging, romantic, vivid and captivating. Who knew a story about a seamstress in Spain could be so intriguing and captivating? If you love thick, juicy female-led novels that sweep you away from all sense of time and responsibility, you need to read The Time In Between by María Dueñas."
— Kathy Cano-Murillo, author of Waking Up in the Land of Glitter and Miss Scarlet's School of Patternless Sewing

“This thrilling debut is marked by immaculate prose and a driving narrative, establishing Dueñas as a writer to watch.”
— Publishers Weekly (starred review)

"It is no surprise this debut novel was a runaway success in Europe. American fans of historical fiction looking for a dramatic, uncomplicated escape will be similarly entranced."
— Library Journal

"From a terrific opening line to the final page, chapters zip by at a pulsing pace."
— USA TODAY

"The Time in Between is a magnificent novel that flawlessly brings together history and intrigue. Sira Quiroga—the seamtress—won’t be easily forgotten.”
— Juan Gómez-Jurado, author of The Moses Expedition

"How can a novel be both cruel and tender, dark and luminous all at the same time, and keep the reader glued to its pages with a complex, captivating narrative? María Dueñas's novel manages to make this possible with a tale that is destined to become a literary classic."
— Javier Sierra, bestselling author of The Secret Supper and The Lady in Blue

"An enticing debut novel from Spain, The Time In Between is luxuriously landscaped with exotic geographies and international intrigue. María Dueñas delivers a hefty book that's as smooth to read as the tailored lines of the haute couture her unforgettable protagonist creates."
— Fabiola Santiago, author of Reclaiming Paris

“With its detailed depictions of fashions and the fashionable crowd, exotic settings like Portuguese beaches and crowded bars in Tangiers, and a growing sense of danger and intrigue, The Time In Between is a stunning novel.“
— Fort Worth Star-Telegram