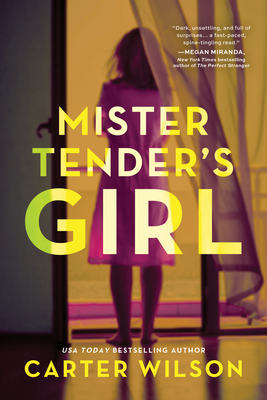 From USA Today bestselling author Carter Wilson comes a chilling psychological thriller based on the real Slenderman mysteries. He's not real, just a monster from a story. But he can still hurt you, stab you, take you as his own… When he calls to you in the night, how far are you willing to go for Mister Tender?

At fourteen, Alice Hill was viciously attacked by two of her classmates and left to die. The teens claim she was a sacrifice for a man called Mister Tender, but that could never be true: Mister Tender doesn't exist. His sinister character is pop-culture fiction, created by Alice's own father in a series of popular graphic novels.

Over a decade later, Alice has changed her name and is trying to heal. But someone is watching her. They know more about Alice than any stranger could: her scars, her fears, and the bits of her she keeps locked away. She can try to escape her past, but Mister Tender is never far behind. He will come with a smile that seduces, and a dark whisper in her ear...

A riveting psychological thriller in the vein of Alex Marwood and inspired by the Slender Man case, Mister Tender's Girl plunges you into a world of haunting memories and the dark, unseen real, leaving you guessing until the harrowing end.

Carter Wilson is the USA Today bestselling author of eight critically acclaimed, standalone psychological thrillers. He is an ITW Thriller Award finalist, a five-time winner of the Colorado Book Award, and his works have been optioned for television and film. Carter lives outside of Boulder, Colorado.

"Dark, unsettling, and full of surprises, Mister Tender’s Girl takes the reader on a dangerous journey alongside a woman who must face the past she’s been hiding from. A fast-paced, spine-tingling, read—and a reminder that imagined dangers are just as worthy of being feared." — Megan Miranda, New York Times bestselling author of The Perfect Stranger

"Carter Wilson hits it out of the park with Mister Tender’s Girl—one of the most suspenseful novels I’ve read in a long time. This book is a true page-turner, riveting on every level." — Allen Eskens, bestselling author of The Life We Bury and The Heavens May Fall

"In spare prose, Wilson ratchets up the horror spawned by obsession to a bloody end. For those who tolerate intense, sometimes graphic fiction, this is mesmerizing." — Booklist, Starred Review

"The writing is both gorgeous and gritty, and the story so enticing, that I gobbled it up in one sitting. I can only humbly request that Carter Wilson hurry up and write some more." — Sandra Block, author of The Girl Without a Name and The Secret Room

"Wilson turns the creep factor up to 11, balancing his prose on a knife's edge. A highly satisfying high-tension thriller. " — Kirkus Reviews

"This elegantly written, masterful thriller, by turns meditative and shocking, lyrical and violent, will keep you glued to the pages from start to finish." — A.J. Banner, USA Today bestselling author of The Good Neighbor and The Twilight Wife

"Not since Gone Girl's "Amazing Amy" has a character from a make believe children's book been so richly imagined and realized, and led to such a twisting, seductive tale. Mister Tender's Girl forces Alice Hill out of her lonely, isolated world to confront the inner demons that arose after she became the victim of a violent attack. As Alice delves into the events surrounding the crime, she finds that the fictional Mister Tender may have been a very different man from what the world believed. Carter Wilson's latest novel will have readers checking outside their windows for monsters—and, like Alice, also looking for those that lurk inside themselves." — Jenny Milchman, USA Today bestselling author of Cover of Snow, Ruin Falls, and As Night Falls

"Chapter by chapter, Carter Wilson's Mister Tender's Girl compels the reader forward: another question, another mystery, another fear to be dispelled or realized. Start reading this thriller and you won't stop until the end. That's how compelling, whether endearing or nefarious, the main characters are. And that's how talented a writer Carter Wilson is." — Randall Silvis, author of Two Days Gone

"...a can't-put-down thriller that will reverberate with readers. The characters are well drawn, the plot hums, the creepiness level is high, and you won't see the ending coming. Fans of psychological suspense shouldn't miss this great thrill ride." — Library Journal

"Make sure you don't have any other plans when you crack this book open. This first-rate thriller will consume you." — The Oklahoman

"Written full of tension sharp as the edge of a razor-blade, Wilson weaves together an intense story that is as chilling as it is haunting. Not for the faint of heart, Mister Tender’s Girl is a mesmerizing, complex thriller that’s impossible to put down until the very end – just make sure to keep the lights on." — BookTrib.com

"With its fierce heroine and surprises at every turn, Mister Tender's Girl is a thriller to devour." — Shelf Awareness for Readers