Darkness Sticks to Everything: Collected and New Poems (Paperback) 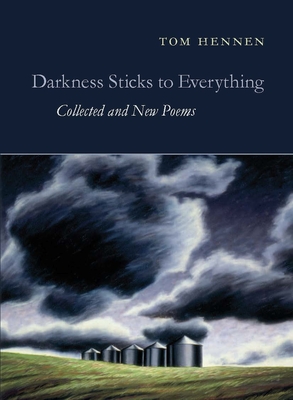 After this all-but-unknown poet was called an "American master" in a long, gorgeous review in The New York Times, Tom Hennen was finally discovered, and his book became a poetry best-seller

"It's hard to believe that this American master--and I don't use those words lightly--has been hidden right under our noses for decades. But despite his lack of recognition, Mr. Hennen...has simply gone about his calling with humility and gratitude in a culture whose primary crop has become fame. He just watches, waits and then strikes, delivering heart-buckling lines." --Dana Jennings, The New York Times

As with Ted Kooser, Tom Hennen is a genius of the common touch. . . . They are amazingly modest men who early accepted poetry as a calling in ancient terms and never let up despite being ignored early on. They return to the readers a thousandfold for their attentions.--Jim Harrison, from the introduction

Many readers will appreciate this evocation of a life not as commonly portrayed in contemporary verse.--Library Journal

There is something of the ancient Chinese poets in Hennen, of Clare and Thoreau, although he is very much a contemporary poet.--Willow Springs

One of the most charming things about Tom Hennen's poems is his strange ability to bring immense amounts of space, often uninhabited space, into his mind and so into the whole poem.--Robert Bly

America is a country that loves its advertising. That loves its boxes we can put people and places into. We love 'Heartland' as opposed to 'Dustbowl.' We also love to be surprised. Rural Minnesota, as written by Tom Hennen in Darkness Sticks to Everything, is a world of realistic loneliness and lessons. It's a collection of sincere poems about man and the land.--The Rumpus

Hennen is a master of the prose poem who] can take little details, tiny details and make them universal.--River Falls Journal

What separates Hennen from many of his contemporaries is his willingness to identify with the natural world in a way that feels neither possessive nor self-serving, but simply (once again) sincere.--Basalt Magazine

There is something strong in all Tom Hennen's poems, an awareness and a clear, sure voice... I don't usually want to end by saying 'Buy this book, ' but I'm going to say it this time: 'You should buy this book.'--Fleda Brown, Interlochen Public Radio

A] delight to read for the person who is willing to slow down with Hennen and take a look under a leaf, or at a bee, or into their own reflection in a rain drop.--The Corresponder

Tom Hennen gives voice to the prairie and to rural communities, celebrating--with sadness, praise, and astute observations--the land, weather, and inhabitants. In short lyrics and prose poems, he reveals the detailed strangeness of ordinary things. Gathered from six chapbooks that were regionally distributed, this volume is Hennen's long-overdue introduction to a national audience. Includes an introduction by Jim Harrison and an afterword by Thomas R. Smith.

In Falling Snow at a Farm Auction

Tom Hennen, author of six books of poetry, was born and raised in rural Minnesota. After abandoning college, he married and began work as a letterpress and offset printer. He helped found the Minnesota Writer's Publishing House, then worked for the Department of Natural Resources wildlife section, and later at the Sand Lake National Wildlife Refuge in South Dakota. Now retired, he lives in Minnesota.

Tom Hennen: Tom Hennen, author of six books of poetry, was born and raised in rural Minnesota. After abandoning college, he married and began work as a letterpress and offset printer. He helped found the Minnesota Writer's Publishing House, then worked for the Department of Natural Resources wildlife section, and later at the Sand Lake National Wildlife Refuge in South Dakota. Now retired, he lives in Minnesota. Jim Harrison: Jim Harrison, one of America's most versatile and celebrated writers, is the author of over thirty books of poetry, fiction, and nonfiction--including Legends of the Fall, the acclaimed trilogy of novellas, and The Shape of the Journey: New and Collected Poems. His books have been translated into two dozen languages, and in 2007 he was elected to the American Academy of Arts and Letters. With a fondness for open space and anonymous thickets, he divides his time between Montana and southern Arizona.