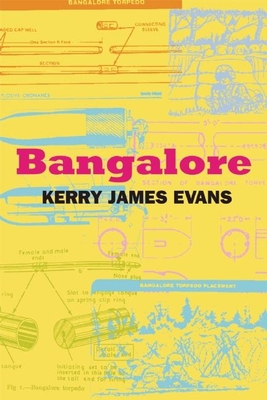 "Evans' jarring debut book of poems draws on his experience as a combat engineer for the Army National Guard...A strong contribution to wartime poetry composed by combatants...Given recent controversy over domestic surveillance and enlisted whistle-blowers, this is a necessary read, indeed."--Booklist

Drawing upon Kerry James Evans's experience in the military, Bangalore speaks from the position of a natural class warrior who came of age desperately poor in some of the most hardscrabble parts of our country. Whether highlighting a barracks argument about gays in the military or contemplating pent-up eros, the poems are experientially political in the best sense.

From Lilacs and Razor Wire:

Bent over in a folding chair, my arm a rag of oil, I scrape the carbon from my M-16with a pipe cleaner here in the armorynamed after a young Colonelwho hanged himself.

No one sitting here really knowswhether or not the Colonelwas a homosexual. I bring up my mother-in-law, who is.

Outside the window the local convictshave decided to mow down the lilacsblossoming along the roadside.

We go back to talking about homosexualsand homosexuality, and I say: We are all a little gay, which lands meon the floor in a wrestling position . . .

Kerry James Evans served six years in the Army National Guard as a combat engineer. He received his MFA in creative writing from Southern Illinois University-Carbondale, and is enrolled in the PhD program in English-Creative Writing from Florida State University. He lives in Tallahassee, Florida.