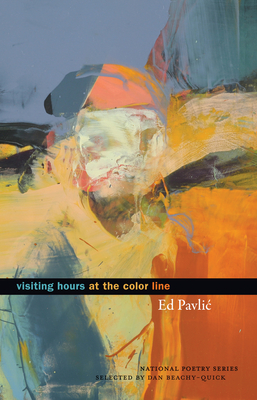 "I am incapable of succinctly praising this poet's immense talent." --TERRANCE HAYES

Often the most recognized, even brutal, events in American history are segregated by a politicized, racially divided "Color Line." But how do we privately experience the most troubling features of American civilization? Where is the Color Line in the mind, in the body, between bodies, between human beings?

Selected for the National Poetry Series by Dan Beachy-Quick, Ed Pavlic's Visiting Hours at the Color Line attempts to complicate this black and white, straight-line feature of our collective imagination, and to map its nonlinear, deeply colored timbres and hues. From daring prose poems to powerful free verse, Pavlic's lines are musically infused, bearing tones of soul, R & B, and jazz. They link the influence of James Baldwin with a postmodern consciousness descended from Samuel Beckett, tracking the experiences of American characters through situations both mundane and momentous. The resulting poems are intense, ambitious, and psychological, making Visiting Hours at the Color Line a poetic tour de force.

Ed Pavlic has been awarded the Honickman First Book Prize and is a National Poetry Series award winner, in addition to receiving fellowships from the Vermont Studio Center, the MacDowell Colony, Bread Loaf, and the W.E.B. DuBois Institute at Harvard University. He is the author of four previous collections of poems including, Winners Have Yet to be Announced: A Song for Donny Hathaway. He lives in Athens, GA.