Along Those Lines: The Boundaries That Create Our World (Paperback) 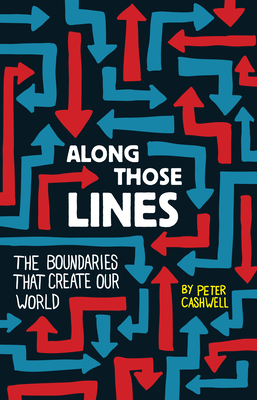 Intellectual reveling at its finest.--Booklist

A delightful and curious book about borders, boundaries, fences, and lines.--Slate

A thoughtful and entertaining look at the demarcations in our lives.--Times Dispatch

After years of crossing borders in search of new birds and new landscapes, Peter Cashwell's exploration of lines between states, between time zones, and between species led him to consider the lines that divide genders, seasons, musical genres, and just about every other aspect of human life. His conclusion: Most had something in common--they were largely imaginary.

Nonetheless, Along Those Lines, a tour of the tangled world of delineation, attempts to address how we distinguish right from wrong, life from death, Democrat from Republican--and how the lines between came to be. Part storyteller, part educator, and part wise guy, Cashwell is unafraid to take readers off the beaten path--into the desert vistas of the Four Corners, the breeding ground of an endangered warbler, or the innards of a grand piano. Something amusing and/or insightful awaits at every stop.

And he's not alone. The tricks and treats of the human instinct for drawing lines are revealed in interviews with experts of all sorts. Learn about the use of the panel border from a Hugo Award-winning comics creator. Trace the edge of extinction with the rediscoverer of the Ivory-billed Woodpecker. Get the truth about the strike zone from an umpire who holds a degree in physics.

You'll begin to see even the most familiar lines in a whole new way.

From music to politics to gender splits, the things that divide us also tell us quite a bit about who we are, and how we got there. You couldn't ask for a better guide than Peter Cashwell, whose eloquent musings on the lines we draw--and sometimes erase--is illuminating, fascinating, and impossible to put down.--Caroline Leavitt

If, as Paul Klee told his students at the Bauhaus, a line is a dot that goes for a 'walk, ' then Along Those Lines is a beguiling and personal treasury of dots on hikes, treks, and walkabouts. To accept this invitation to meander through the author's territory of boundaries, borders, definitions, demarcations, and delineations is to be rewarded with surprising answers to questions you didn't know you had until now, about everything under the sun, from strike zones, musical genres, and Gerrymandering to birding, gender, and how different religions define the lines between right and wrong. Peter Cashwell's appreciation of the boundaries that create our world is a pure delight. --Katharine Weber

As if by magic, Cashwell gives us the power to see the invisible lines we live by and--perhaps more importantly--the permission to smudge, erase, dissolve, or redraw the lines that don't serve us well. Along Those Lines is an imaginative and well-researched book full of Cashwell's trademark imagination and humor.* Even the most edgy, rule-bound readers will come away enlightened and liberated. *His footnotes alone could open Saturday Night Live.]--Maria Mudd Ruth

Peter Cashwell has written a brilliant, mind-bending saga of delineation as a supreme act of imagination, as a noble and often comic attempt to confine the raggedy universe within a geometer's desperate dreams of precision.--Will Blythe

Peter Cashwell dabbled in everything from radio announcing to improv comedy before settling into his career as a writer and teacher. His lifelong fascination with birds and language eventually inspired him to write The Verb 'To Bird', a Barnes & Noble Discover Great New Writers selection (Paul Dry Books, 2003). Since 1995, Cashwell has taught at Woodberry Forest School in Virginia, where he lives with his wife and two sons.

Peter Cashwell dabbled in everything from radio announcing to improv comedy before settling into his career as a writer and teacher. His lifelong fascination with birds and language eventually inspired him to write The Verb 'To Bird', a Barnes & Noble Discover Great New Writers selection (Paul Dry Books, 2003). Since 1995, Cashwell has taught at Woodberry Forest School in Virginia, where he lives with his wife and two sons.