The Secret Science Alliance and the Copycat Crook (Paperback) 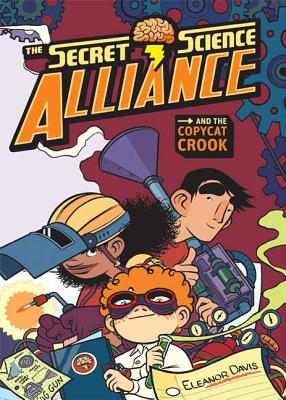 Super-smart Julian Calendar thinks starting junior high at a new school will mean he can shed his nerdy image-but then he meets Ben and Greta, two secret scientists like himself! The three form a secret club, complete with a high-tech lair. There, they can work to their hearts content on projects like the Stink-O-Meter, the Kablovsky Copter, and the Nightsneak Goggles.

All that tinkering comes in handy when the trio discovers an evil scientist's dastardly plan to rob a museum. Can three inventors, armed with their wacky creations, hope to defeat this criminal mastermind?

Eleanor Davis received a Theodore Seuss Geisel Honor award for her first children's book, Stinky, published by Francoise Mouly's Toon Books in 2008. Her critically acclaimed stories for older readers have appeared in the anthologies The Best American Comics 2008, for which she did the cover, and Mome. Eleanor's mini-comics first garnered attention for their innovative handmade die-cuts and coloring. She was chosen as one of Print magazine's 2009 New Visual Artists. She lives and works with her boyfriend, Drew Weing, in Athens, Georgia. This is her first full-length graphic novel.