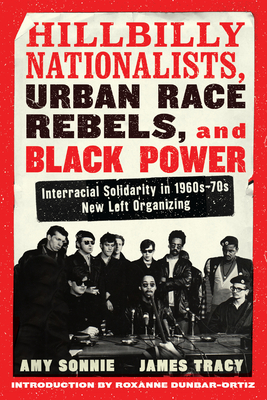 THE LITTLE-KNOWN STORY OF POOR AND WORKING-CLASS WHITES, URBAN ETHNIC GROUPS AND BLACK PANTHERS ORGANIZING SIDE BY SIDE FOR SOCIAL JUSTICE IN THE 1960S AND '70S


Some of the most important and little-known activists of the 1960s were poor and working-class radicals. Inspired by the Civil Rights movement, the Black Panthers, and progressive populism, they started to organize significant political struggles against racism and inequality during the 1960s and into the 1970s.

Historians of the period have traditionally emphasized the work of white college activists who courageously took to the streets to protest the war in Vietnam and continuing racial inequality. Poor and working-class whites have often been painted as spectators, reactionaries, and, even, racists. But authors James Tracy and Amy Sonnie disprove that narrative.

Through over ten years of research, interviewing activists along with unprecedented access to their personal archives, Tracy and Sonnie tell a crucial, untold story of the New Left. Their deeply sourced narrative history shows how poor and working-class individuals from diverse ethnic, rural and urban backgrounds cooperated and drew strength from one another. The groups they founded redefined community organizing, and transformed the lives and communities they touched.

Hillbilly Nationalists, Urban Race Rebels and Black Power is an important contribution to our understanding of a pivotal moment in U.S. history.

Among the groups in the book:

+ In Philadelphia, the October 4th Organization united residents of industrial Kensington against big business, war, and a repressive police force . . .

+ In the Bronx, White Lightning occupied hospitals and built coalitions with doctors to fight for the rights of drug addicts and the poor.

AMY SONNIE is an activist, educator and librarian who has worked with U.S. grassroots social justice movements for the past seventeen years. She is co-founder of the national Center for Media Justice. Her first book, Revolutionary Voices, an anthology by queer and transgender youth (Alyson Books, 2000), is banned in libraries in New Jersey and Texas and appears on the American Library Association’s list of "Top Ten Most Frequently Challenged Books." Her work has appeared in the San Franscisco Bay Guardian, Alternet, Philadelphia Inquirer, Clamor, the Oxygen Television Network, Bitch magazine, and The Sojourner.

JAMES TRACY is a long-time social justice organizer in the San Francisco Bay Area. He is the founder of the San Francisco Community Land Trust and has been active in the Eviction Defense Network and the Coalition On Homelessness, SF. He has edited two activist handbooks for Manic D Press: The Civil Disobedience Handbook and The Military Draft Handbook. His articles have appeared in Left Turn, Race Poverty and the Environment, and Contemporary Justice Review.

Roxanne Dunbar-Ortiz (Foreword) grew up in rural Oklahoma, daughter of a landless farmer and a half Native American mother. She is Professor Emerita in the Department of Ethic Studies at California State University East Bay, and the author of numerous books on Indigenous peoples' histories, as well as three acclaimed historical memoirs: Red Dirt: Growing Up Okie; Outlaw Woman: A Mermoir of the War Years, 1960 - 1975; Blood on the Border: The Contra War, and Roots of Resistance: A History of Land Tenure in New Mexico, 1680 - 1980.