The Puzzle of the Happy Hooligan (A Hildegarde Withers Mystery) (Paperback) 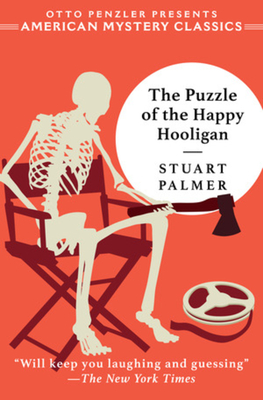 Do you love Murder, She Wrote? Hildegarde Withers is the Jessica Fletcher of the 1930s and 1940s, and this adventure finds her investigating mysterious crimes befalling eccentric screenwriters on a studio lot - and everyone is a suspect. This is both an engrossing and twisty murder mystery, and a very effective satire of the movie business and Hollywood celebrity in the studio system.

After a screenwriter is murdered on a film set, a street-smart school teacher searches for the killer.

Hildegarde Withers is just your average school teacher—with above-average skills in the art of deduction. The New Yorker often finds herself investigating crimes led only by her own meddlesome curiosity, though her friends on the NYPD don’t mind when she solves their cases for them. After plans for a grand tour of Europe are interrupted by Germany’s invasion of Poland, Miss Withers heads to sunny Los Angeles instead, where her vacation finds her working as a technical advisor on the set of a film adaptation of the Lizzie Borden story. The producer has plans for an epic retelling of the historical killer’s patricidal spree—plans which are derailed when a screenwriter turns up dead. While the local authorities quickly deem his death accidental, Withers suspects otherwise and calls up a detective back home for advice. The two soon team up to catch a wily killer.

At once a pleasantly complex locked room mystery and a hilarious look at the foibles of Hollywood, The Puzzle of the Happy Hooligan finds Palmer, a screenwriter himself, at his most perceptive. Reprinted for the first time in over thirty years, this riotously funny novel shows why Hildegarde Withers was among the most beloved detectives of the Golden Age American mystery novel.

Stuart Palmer (1905–1968) was an American author of mysteries. Born in Baraboo, Wisconsin, Palmer worked a number of odd jobs—including apple picking, journalism, and copywriting—before publishing his first novel, the crime drama Ace of Jades, in 1931. It was with his second novel, however, that he established his writing career: The Penguin Pool Murder introduced Hildegarde Withers, a schoolmarm who, on a field trip to the New York Aquarium, discovers a dead body in the pool. Withers was an immensely popular character, and went on to star in thirteen more novels, including Miss Withers Regrets (1947) and Nipped in the Bud (1951). A master of intricate plotting, Palmer found success writing for Hollywood, where several of his books, including The Penguin Pool Murder, were filmed by RKO Pictures Inc.

Otto Penzler, the creator of American Mystery Classics, is also the founder of the Mysterious Press (1975); Mysterious Press.com (2011), an electronic-book publishing company; and New York City’s Mysterious Bookshop (1979). He has won a Raven, the Ellery Queen Award, two Edgars (for the Encyclopedia of Mystery and Detection, 1977, and The Lineup, 2010), and lifetime achievement awards from Noircon and The Strand Magazine. He has edited more than 70 anthologies and written extensively about mystery fiction.

The Puzzle of the Happy Hooligan is a book that will keep you laughing and guessing from the first page to the last.