Incidents of Travel in Egypt, Arabia Petraea and the Holy Land (Paperback) 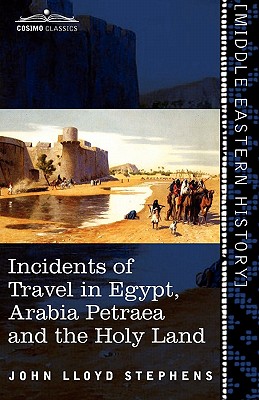 Perhaps the first modern travelogues still to capture the imaginations of armchair explorers, the mid-19th-century bestselling books of American diplomat and writer JOHN LLOYD STEPHENS (1805-1852) reads like the most inspired of novels. The poetic immediacy places the reader square in the saddle of adventure. In this classic 1837 work-which a critic like Edgar Allan Poe praised for its "freshness of manner evincing manliness of feeling"-Stephens takes the reader on an evocative journey through the Middle East, from a visit to the pyramids of Egypt to encounters with enthusiastic locals and much more. Complete with all the beautiful original illustrations by English artist and architect Frederick Catherwood (1799-1854), this delightful book continues to enthrall adventurous spirits today. JOHN LLOYD STEPHENS (1805-1852) was an important part of the reintroduction of Mayan Civilization to middle America. He was an explorer, diplomat, and writer, who specialized in Mesoamerican studies. He incorporated the Ocean Steam Navigation Company at a time when the British controlled travel to and from the United States. In 1849 he was appointed the Vice President of the Panama Railroad Company, later becoming the president. He supervised the project until his death from a liver disease at age 46.