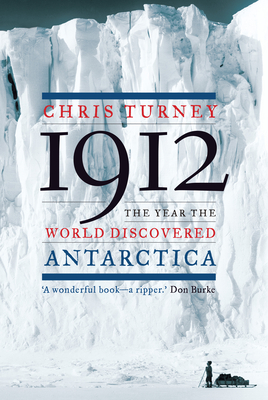 "The South Pole discovered" trumpeted the front page of The Daily Chronicle on March 8, 1912, marking Roald Amundsen's triumph over the tragic Robert Scott. Yet behind all the headlines there was a much bigger story. Antarctica was awash with expeditions. In 1912, five separate teams representing the old and new world were diligently embarking on scientific exploration beyond the edge of the known planet. Their discoveries not only enthralled the world, but changed our understanding of the planet forever. Tales of endurance, self–sacrifice, and technological innovation laid the foundations for modern scientific exploration, and inspired future generations.

To celebrate the centenary of this groundbreaking work, 1912: The Year the World Discovered Antarctica revisits the exploits of these different expeditions. Looking beyond the personalities and drawing on his own polar experience, Chris Turney shows how their discoveries marked the dawn of a new age in our understanding of the natural world. He makes use of original and exclusive unpublished archival material and weaves in the latest scientific findings to show how we might reawaken the public's passion for discovery and exploration

Chris Turney is an Australian and British geologist living in Sydney. He led the radiocarbon dating on the Hobbit fossil of Flores, Indonesia that hit the headlines worldwide in 2004, and has published numerous scientific articles. In 2011, he was awarded a prestigious Australian Research Council Laureate Fellowship. Turney has been described by The Saturday Times as "the new David Livingstone."

"Turney successfully conveys the heroism and flaws of the early explorers as they challenged the preternatural dangers of Antarctica."—Publishers Weekly

"As the last continent to be discovered and explored, the history of Antarctica is relatively short; the first recorded landfall on the continent wasn't until 1821. [And] while each expedition could easily merit its own book, Turney adroitly manages to give a full portrait of each explorer and crew with giving any short shrift."—Kirkus