Arctic Adventure: My Life in the Frozen North (Hardcover) 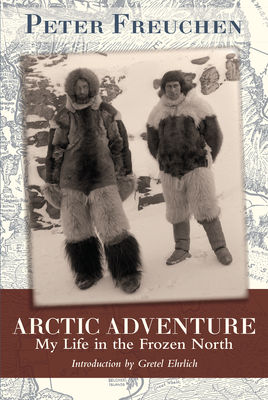 Shortly after his death in 1957, The New York Times obituary of Peter Freuchen noted that "except for Richard E. Byrd, and despite his foreign beginnings, Freuchen was perhaps better known to more people in the United States than any other explorer of our time." During his lifetime, Freuchen's remarkable adventures related in his books, magazine articles, and films, made him a legend. In 1910, Freuchen, along with his friend and business partner, Knud Rasmussen, the renowned polar explorer, founded Thule-a Greenland Inuit trading post and village only 800 miles from the North Pole.

Freuchen lived in Thule for fifteen years, adopting the ways of the natives. He married an Inuit woman, and together they had two children. Freuchen went on many expeditions, quite a few of which he barely survived, suffering frostbite, snow blindness, and starvation. Near the North Pole there is no such thing as an easy and safe outing.

In Arctic Adventure Freuchen writes of polar bear hunts, of meeting Eskimos who had resorted to cannibalism during a severe famine, and of the thrill of seeing the sun after three months of winter darkness. Trained as a journalist before he headed north, Freuchen is a fine writer and great storyteller (he won an Oscar for his feature film script of Eskimo). He writes about the Inuit with genuine respect and affection, describing their stoicism amidst hardship, their spiritual beliefs, their ingenious methods of surviving in a harsh environment, their humor and joy in the face of danger and difficulties, and the social politics behind such customs as "wife-trading." While his experiences make this book a page-turner, Freuchen's warmth, self-deprecating wit, writing skill and anthropological observations make this book a literary stand out.