The Island of Missing Trees: A Novel (Hardcover) 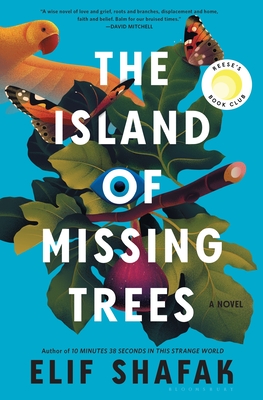 The Island of Missing Trees is a beautiful, sweeping tale of enduring love, grief, and the ways in which we move forward from intergenerational traumas. Split between a cold London winter and the midst of the Cypriot civil war of 1974 and narrated by a fig tree, the story aches with a love for the natural world, giving voice to the voiceless. Its quiet profundity opens a world beyond borders and human conflicts, a world where truths are uncovered and healing is possible.

"A wise novel of love and grief, roots and branches, displacement and home, faith and belief. Balm for our bruised times." -David Mitchell, author of Utopia Avenue

A rich, magical new novel on belonging and identity, love and trauma, nature and renewal, from the Booker-shortlisted author of 10 Minutes 38 Seconds in This Strange World.

Two teenagers, a Greek Cypriot and a Turkish Cypriot, meet at a taverna on the island they both call home. In the taverna, hidden beneath garlands of garlic, chili peppers and creeping honeysuckle, Kostas and Defne grow in their forbidden love for each other. A fig tree stretches through a cavity in the roof, and this tree bears witness to their hushed, happy meetings and eventually, to their silent, surreptitious departures. The tree is there when war breaks out, when the capital is reduced to ashes and rubble, and when the teenagers vanish. Decades later, Kostas returns. He is a botanist looking for native species, but really, he's searching for lost love.

Years later a Ficus carica grows in the back garden of a house in London where Ada Kazantzakis lives. This tree is her only connection to an island she has never visited--- her only connection to her family's troubled history and her complex identity as she seeks to untangle years of secrets to find her place in the world.

A moving, beautifully written, and delicately constructed story of love, division, transcendence, history, and eco-consciousness, The Island of Missing Trees is Elif Shafak's best work yet.

Elif Shafak is an award-winning British-Turkish novelist. She writes in both Turkish and English, and has published 19 books, 12 of which are novels. Her work has been translated into 55 languages. Her latest novel 10 Minutes 38 Seconds in this Strange World was shortlisted for the Booker Prize and RSL Ondaatje Prize; and chosen as Blackwell's Book of the Year. Her previous novel, The Forty Rules of Love was chosen by BBC among 100 Novels that Shaped Our World. Shafak has been conferred Doctor of Humane Letters by Bard College in 2021. Shafak holds a PhD in political science, and she has taught at various universities in Turkey, the US and the UK, including St Anne's College, Oxford University, where she is an honorary fellow. Shafak is an inspiring public speaker and twice TED Global speaker; she contributes to major publications around the world and she was awarded the medal of Chevalier de l'Ordre des Arts et des Lettres. elifshafak.com

“Shafak amazes with this resonant story of the generational trauma of the Cypriot Civil War . . . Shafak's fans are in for a treat, and those new to her will be eager to discover her earlier work.” —Publishers Weekly, starred review

“Shafak explores the physical, psychological, and moral cost of the long conflict between Turkish and Greek Cypriots on the island's citizens and their environment, [and] exhibits her passion for an endangered natural world that possesses wisdom the human world lacks . . . Ambitious, thought-provoking, and poignant.” —Kirkus

“A beautiful contemplation of some of life's biggest questions about identity, history and meaning.” —Time, "Most Anticipated Books of Fall"

“Shafak's writing is magnetic, and while reading, one is completely absorbed by the world of both Cyprus and London (the story switches time frames and locations with ease) and the grief of the characters is palpable. And, in a narrative choice I loved, it's partly narrated by the fig tree in the backyard. You don't want to miss this one.” —Alma.com, "Favorite Books for Fall 2021"

“A wise novel of love and grief, roots and branches, displacement and home, faith and belief. Balm for our bruised times.” —David Mitchell, author of UTOPIA AVENUE

“Trees, here, grow through the lives of these unforgettable characters, becoming bearers of memory, makers of metaphor and witnesses to atrocity. Shafak has written a brilliant novel - one that rings with her characteristic compassion for the overlooked and the under-loved, for those whom history has exiled, excluded or separated. I know it will move many readers around the world, as it moved me.” —Robert McFarlane, author of UNDERLAND

“This is an enchanting, compassionate and wise novel and storytelling at its most sublime. Though rooted in bloody atrocity it sings to all the senses.” —Polly Samson, author of A THEATRE FOR DREAMERS

“A wonderfully transporting and magical novel that is, at the same time, revelatory about recent history and the natural world and quietly profound.” —William Boyd, author of TRIO

“An excruciatingly tender love story that transcends cultures, generations and, most remarkably, species. A transformational book about our arboreal relatives, to be cherished and savoured.” —Naomi Klein, author of ON FIRE

“A beautiful and magical tale infused with love. Stunning.” —Ruth Jones, author of US THREE

“At once intimate in tone and ambitious in its reach, The Island of Missing Trees is a novel that moves with the urgency of a mystery as it uncovers the story of lovers divided first by war and then, after they are reunited and have a child, by that same war's enduring psychic wounds. But there is tenderness and humor in this tale, too, and the intense readerly pleasures of a narrative that dances from the insights of ecological science to Greek myth and finally to their surprising merger in what might be called-natural magic.” —Siri Hustvedt, author of MEMORIES OF THE FUTURE

“A beautiful novel about the broken island of Cyprus and its wounded and scarred inhabitants, The Island of Missing Trees teaches us that brokenness can only be healed by love.” —Bernhard Schlink, author of OLGA

“Shafak makes a new home for us in words.” —Colum McCann

“One of the best writers in the world today.” —Hanif Kureish

“A work of brutal beauty and consummate tenderness.” —Simon Schama, on 10 MINUTES 38 SECONDS IN THIS STRANGE WORLD

“Shafak, alternating between bracing matter-of-factness and glorious metaphorical descriptions, casts light on the atrocities of ethnic violence, the valor of those who search for and excavate mass graves, the inheritance of trauma, and the wonders of trees and nature's interconnectivity . .. . an enthralling, historically revelatory, ecologically radiant, and emotionally lush tale of loss and renewal.” —Booklist, starred review