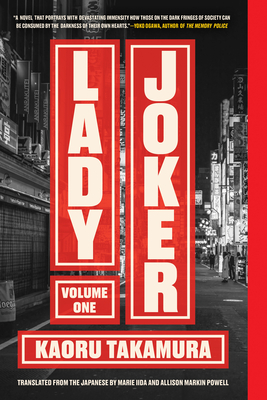 For the reader of suspense who wants it all, LADY JOKER, VOL. ONE gives 100% (or 50%, with VOL. TWO’s English translation arriving in 2022).  A heist tale, told from the POV of the heisters, heistees, law enforcement and media, with equally dispersed backstory (to root for all) and withheld info (to trust in none).  It is a bit massive, but perfectly paced, doled out and subtly streamlined; an unexpected speedy read.  Question: Where have you been all my life?  Answer: In Japan since, like, the 90s… learn a second language, pal.  Whoa, there, buddy.

One of Japan’s great modern masters, Kaoru Takamura, makes her English-language debut with this two-volume publication of her magnum opus.

Tokyo, 1995. Five men meet at the racetrack every Sunday to bet on horses. They have little in common except a deep disaffection with their lives, but together they represent the social struggles and griefs of post-War Japan: a poorly socialized genius stuck working as a welder; a demoted detective with a chip on his shoulder; a Zainichi Korean banker sick of being ostracized for his race; a struggling single dad of a teenage girl with Down syndrome. The fifth man bringing them all together is an elderly drugstore owner grieving his grandson, who has died suspiciously after the revelation of a family connection with the segregated buraku community, historically subjected to severe discrimination.

Intent on revenge against a society that values corporate behemoths more than human life, the five conspirators decide to carry out a heist: kidnap the CEO of Japan’s largest beer conglomerate and extract blood money from the company’s corrupt financiers.

Inspired by the unsolved true-crime kidnapping case perpetrated by “the Monster with 21 Faces,” Lady Joker has become a cultural touchstone since its 1997 publication, acknowledged as the magnum opus by one of Japan’s literary masters, twice adapted for film and TV and often taught in high school and college classrooms.

Kaoru Takamura was born in Osaka in 1953 and is the author of thirteen novels. Her debut, Grab the Money and Run, won the 1990 Japan Mystery and Suspense Grand Prize, and since then her work has been recognized with many of Japan’s most prestigious awards for literary fiction as well as for crime fiction: the Naoki Prize, the Noma Literary Award, the Yomiuri Prize, the Shinran Prize, the Jiro Osaragi Prize, the Mystery Writers of Japan Award, and the Japan Adventure Fiction Association Prize. Lady Joker, her first novel to be translated into English, received the Mainichi Arts Award and has been adapted into both a film and a television series.

Allison Markin Powell is a literary translator, editor, and publishing consultant. She has been awarded grants from English PEN and the NEA, and the 2020 PEN America Translation Prize for The Ten Loves of Nishino by Hiromi Kawakami. Her other translations include works by Osamu Dazai, Kanako Nishi, and Fuminori Nakamura. She was the guest editor for the first Japan issue of Words Without Borders, and she maintains the database Japanese Literature in English.

Marie Iida has served as an interpreter for the New York Times bestselling author Marie Kondo’s Emmy-nominated Netflix documentary series, Tidying Up with Marie Kondo. Her nonfiction translations have appeared in Nang, MoMA Post, Eureka and over half a dozen monographs on contemporary Japanese artists and architects, including Yayoi Kusama, Toyo Ito, and Kenya Hara for Rizzoli New York. Marie currently writes a monthly column for Gentosha Plus about communicating in English as a native Japanese speaker.

“[Lady Joker] is a work you get immersed in, like a sprawling 19th century novel or a TV series like "The Wire." It reveals its world in rich polyphonic detail. Inspired by a real-life case, it takes us inside half a dozen main characters, follows scads of secondary ones and enters bars and boardrooms we could never otherwise go . . . Yet for all its digressions, Lady Joker casts a page-turning spell.”
—John Powers, NPR's Fresh Air

“Like Ellroy’s American Tabloid and Carr’s The Alienist, the book uses crime as a prism to examine dynamic periods of social history . . . Takamura’s blistering indictment of capitalism, corporate corruption and the alienation felt by characters on both sides of the law from institutions they once believed would protect them resonates surprisingly with American culture.”
—Paula Woods, Los Angeles Times

“Hallelujah! Inspired by the real-life, still unsolved Glico-Morinaga kidnapping and extortion case that led to the nationwide hunt for 'The Monster with Twenty-one Faces,' Kaoru Takamura’s Lady Joker is at last available in translation; epic in its scale and vision, yet gripping from first to last, this is one of the great masterpieces of Japanese crime fiction and one of the must-read books of this or any year.”
—David Peace, author of Tokyo Year Zero

“For those wanting a page-turning thriller in the vein of Hideo Yokoyama’s Six Four, there’s plenty of police procedure, smoky backrooms, tense press conferences and angry superiors slamming things on desks. But there is also social commentary, history and a comprehensive account of how Japan’s corporate, political and criminal worlds coexist in an uneasy, toxic relationship. Like all great fiction, Lady Joker informs and entertains.”
—The Japan Times

“It is well worth the wait for anyone interested in a panoramic portrait of modern Japanese society, including its dark corners, as well as fans of intelligent mysteries.”
—The Nikkei

“Mysterious and multilayered, [Lady Joker] gives readers extortion and kidnapping as it critiques the dark corners of Japanese society and the human experience.”
—Ms. Magazine

“A novel that portrays with devastating immensity how those on the dark fringes of society can be consumed by the darkness of their own hearts.”
—Yoko Ogawa, author of The Memory Police

“A swarm of characters, an unorthodox structure, and slow-moving, ultimately irresistible suspense distinguish Lady Joker . . . Like some novels by James Ellroy and Marlon James, Lady Joker is wildly ambitious in scope.”
—Pittsburgh Post-Gazette

“An immense and extraordinary feat of writing and translation that has been long-awaited in English, Lady Joker is at once a thriller and a sweeping cultural history of Japan, a love story and a work of poignant social commentary.”
—BookRiot

“Impressive, very large-scale crime(-and-more) novel of post-war Japan . . . Lady Joker is anything but your usual mystery.”
—The Complete Review

“Through the working class, and executives, the police force and media, author Kaoru Takamura brings to her readers a Japan which is complicated and often corrupt. The disenfranchised working class who commit a crime seem no better (or worse) than the corporate executives who commit crimes in their own, more subtle, ways.”
—Dolce Belleza

“Centered around an extortion case involving a beer company, Lady Joker would ordinarily be categorized in the crime or mystery novel genre, yet the book deserves to be called an exemplary literary work that depicts contemporary society . . . A magnum opus . . . It requires extraordinary skill to fully depict the ambivalence of Japanese society, in all its detail. Reading Lady Joker together with James Ellroy’s American Tabloid and the drama behind the Kennedy assassination serves as an intriguing comparison. Viewing a society through the lens of a crime is like examining a disease or a corpse to get at the person: it exposes the foundations of human existence.”
—Yomiuri Newspaper

“Using the relationship between individuals and institutions as its axis, Lady Joker attempts to depict the contemporary era in its entirety. The effort is so reckless as to be almost quixotic, but with her formidable literary talents, Kaoru Takamura accomplishes her goal to a handsome degree . . . Lady Joker is a multilayered novel that allows for many interpretations, yet its structure places it firmly within the framework of a social-awareness mystery.”
—Shosetsu Subaru Literary Magazine

“Takamura’s eye for detail and storytelling prowess are astonishing . . . It’s possible to read Lady Joker in various ways—as a mystery novel, a police procedural, or a cautionary tale of corporate risk management. I read it as an exploration of the original sin of human existence . . . The depth of empathy readers will feel for this book’s characters directly corresponds with the author’s insight on the intersections of human existence.”
—Ushio Magazine