Saving the Guinea Hogs: The Recovery of an American Homestead Breed (Paperback) 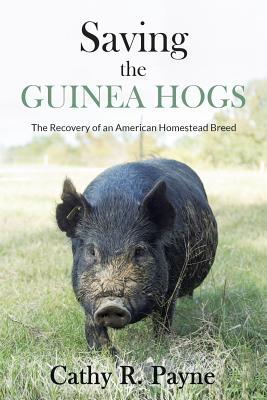 "These were the best hogs I've ever seen," said seventy-five year old Cohen Archer. He grew up with the amiable black Guinea Hogs in Washington County, Georgia. Cohen's father died when he was just twelve years old, in 1954. His mother subsequently sold the hogs, and Cohen didn't see another one until he visited Cathy Payne's farm in 2017. Mr. Archer shares his memories of the hogs, his family's favorite breed, and how he remembered them building nests with sticks to protect their newborn litters in the woods. He also remembered their gentle natures, soft grunts, and amicable personalities.

Saving the Guinea Hogs, a narrative nonfiction book, is the first definitive history of the Guinea Hog breed. Rich in historically accurate information, it is easy to read and full of colorful characters. It is a comprehensive overview of the people who raised Guinea Hogs from 1940 to 1995, told in their own words and enlightening stories. These first-person stories reveal the subjects' deep fondness for and attachment to the amiable Guinea Hogs. Some recall a time when their families did not have access to electricity or indoor plumbing. The Guinea Hog was utilized head to tail, providing meat, lard, and grease to meet crucial family needs.

The Guinea Hog is a small, black, hairy, sturdy, and gentle breed of hog kept in the Southeastern United States prior to the Civil War. The Guinea Hog has long been a part of America's cultural history. Due to a confluence of factors, it was nearly extinct by the 1990s. The loss of any breed's unique genetic material can leave the future of a species in peril. Saving the Guinea Hogs will bring the characteristics of the hogs to life, including what is known of their history and genetics, their unique characteristics, their temperament and personality, and how they benefitted generations of small landholders.

Additionally, socioeconomic and political factors that eventually led to the near demise of the Guinea Hog are reported. Around 2004, a group of dedicated conservation breeders, encouraged by The Livestock Conservancy, stepped forward to save the Guinea Hogs. Cathy Payne interviewed many of the breeders and reports their stories through their own words. Her diligent research over several years retraces the history of the Guinea Hogs while preserving the memories of those who kept them. These stories are rich in details including how livestock was kept on the homestead or run in the woods on shared land, how they were marked and trained to come home, and how in some cases they were driven to market on foot, sometimes across state lines, and traded for produce. There are also stories about home butchering as a community affair and how smokehouses and other now-forgotten food preservation techniques were used before the families owned either refrigerators or freezers.

When Cathy's research brought her in contact with rare genetic bloodlines not preserved during the formation of the American Guinea Hog Association (AGHA) in 2006, she worked with a network of women to obtain these genetics and work with the registry to add valuable genetic diversity to the national herd.

Cathy takes what she has learned from her contacts with these breeders and focuses on strategies to preserve this breed and its distinct family bloodlines. Readers are encouraged to become active in the breed assocation and register their hogs to monitor their genetics and relatedness. Cathy states that she wants these hogs to still thrive in the year 2120 for the enjoyment of her great grandchildren. These homestead hogs are survivors worth preserving for future generations