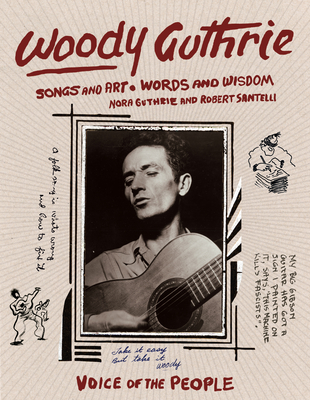 The timely, passionate, and humanely political work of America's greatest folk singer and songwriter is presented through his own words and art—curated by Woody's daughter—in this essential self-portrait, including never-before published lyrics and personal writing, and testimony from contemporary writers and musicians on his powerful relevance today.

Woody Guthrie and his passionate social politics are as crucial today as they have ever been. A powerful voice for justice, and the author of more than 3,000 songs (including "This Land is Your Land"), he was also a poet, painter, illustrator, novelist, journal keeper, and profuse letter writer. Curated by his daughter Nora and award-winning music historian Robert Santelli, this fresh, intimate, and beautifully designed book thematically reveals Woody's story through his own personal writings, lyrics, and artwork, urgently bringing his voice to life.

Featuring never-before-published lyrics to some of his greatest songs, personal diary entries, doodles, quips and jokes, and piercing insights on his politics and justice, this is an undeniable and important celebration of Woody's vibrant life's work. Created to be enjoyed by all – those interested in folk music or those interested in Woody's thoughts on Life in all its aspects, from Politics and Spirituality, to Love and Family – this book reflects Bob Dylan's thoughts on Woody Guthrie; "You can listen to his songs and learn how to live."

ONE OF THE MOST INFLUENTIAL SONGWRITERS IN AMERICAN MUSIC HISTORY: Woody Guthrie has had a profound impact on American musicians, writers, politicians (and the everyman who found solace and kinship in Guthrie's writings and political beliefs), who have been shaped by his music and activism—namely the great founding father of songwriting himself, Bob Dylan, for whom he was a mentor. Others who have named Guthrie as a major influence include Bruce Springsteen, Johnny Cash, Pete Seeger, John Mellencamp, Billy Bragg, Joe Strummer, and Jerry Garcia, just to name a few.

RARE ARCHIVAL MATERIAL: This is Woody's life told primarily in his own words, with never-before published handwritten lyrics, artwork, journals, and much more.

Robert Santelli is the Founding Executive Director of the GRAMMY Museum in Los Angeles and the author of more than a dozen books on American music. He also developed the Tulsa-based Woody Guthrie Center with Nora Guthrie and was VP of Education and Public Programs at the Rock & Roll Hall of Fame and Museum in Cleveland.

"The book is a delightful visual feast, featuring scads of rare vintage photos, copious examples of Guthrie’s own drawings and sketches, excerpts from diaries and day planners, dozens of reproductions of typed and handwritten letters, lyrics, and poems that let us into his life and his mind in ways that neither his own fascinating autobiography, Bound for Glory, nor conventional posthumous biographies did."

"This book may introduce Guthrie to a new generation seeking to sound off on the present condition of the American Spirit."

"This book is an essential document (and gift) for a time when America is once again fighting for its democratic life...Guthrie is more relevant now than ever."

"Through Nora’s careful, mindful curation, we get to see that not only was Guthrie an exquisite songwriter, but also a committed citizen, a consumed intellectual, a well-rounded artist of all forms, and a remarkable man fascinated by the culture and dynamics of a certain era of the 20th Century."

"This is an undeniable and important celebration of Woody’s vibrant life’s work."

"“Like the greatest works by or about any genuine icon, Songs and Art-Words and Wisdom should move the reader to delve (back) into not only this man's work, but that of the artists he inspired. Without much other multi-media documentation of the Oklahoman's life and work.such projects as this are indispensable in reaffirming that Woody Guthrie, the man and the artist are one and the same-he is, a figure deserving true reverence and admiration.”

"If you only know Woody Guthrie as a Dylan influence, or as the guy whose guitar said THIS MACHINE KILLS FASCISTS (“it means just what it says too,” wrote Woody about the motto), this new book will open your eyes to a complex, incredibly brave voice."

"Edited with love and precision by Guthrie’s daughter Nora and scholar Robert Santelli, Songs and Art * Words and Wisdom takes a 360-degree look at a fascinating American life and a profoundly influential artist.”

"What a wealth of information, entertainment, education, photography, artwork and surprises galore between the hard-covers of this gem of a gorgeous coffee-table book, a book, like the Bible, meant to be studied and repeatedly referred to, rather than simply read."

"An astonishing, and very illuminating, collection of Guthrie’s lyrics - some of them never-before-published - his personal diary entries, his doodles and other artwork, his quips and jokes, and his insight into politics and justice."