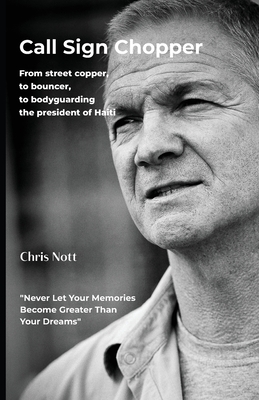 "Chris's book is an exciting danger-filled journey from England to Haiti. A gripping read. I highly recommend it to all armchair adventurers." Sir Ranulph Fiennes OBE - Named by the Guinness Book of Records as "the world's greatest living explorer"

Two years later Chris' world is shattered when the father he idolises deserts the family leaving him to help support his mother and younger brother. He quits school with no qualifications but miraculously finds a job as a clerical assistant with the Ministry of Defence, hoping that Martinis and Aston Martins will soon follow.

Chris quickly realises however, that clerical assistants never get to be secret agents.

One evening, a chat with a local copper convinces Chris to join the police. Twenty-six years of active service follow until his career is cut short by a car accident leaving him with a broken neck. Medically discharged from the police but still longing for adventurous work, Chris takes a job as a bouncer.

When the BBC comes calling, looking for bouncers to star in 'Muscle' - a new documentary series investigating city centre violence - Chris finds himself unexpectedly in the spotlight.

While filming 'Muscle' he's sent to Los Angeles to train as a weapons carrying bodyguard. Impressed by his skills, the organisation invites him to join an elite team of mercenaries tasked with guarding the president of the impoverished Republic of Haiti.

Follow Chris's remarkable journey from the streets of Bristol to the land of Voodoo, violent revolution and the ever-present spectre of death.

"Love it, my anxiety was trying to kick in after the first sentence"Rich Jones, Author of 'Charlie Four Kilo' www.CharlieFourKilo.com

"I'd put you on par with Andy McNab"Kevin Timpson, Mid Glamorgan, Wales UK

"Call Sign Chopper has the ring of authenticity about it. It's the precise little things, like When Chris Nott says of a burned body, "all I knew for sure was that they had been wearing boots." I was with Chris in Haiti. It was a different day but I can still remember with crystal clarity that one fly buzzing round a body and the rest, landed and feasting on the blood."Bill Brookman, Loughborough, Leicestershire