And Their Children After Them: A Novel (Paperback) 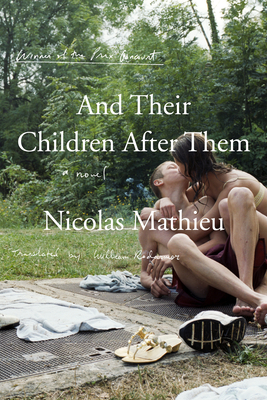 A spilled inkwell set into action by a 14 year old boy wanting to see naked girls.  Seems commonplace enough, but in lieu of cleaning up the mess, Mathieu lets the the ink slow-flow through the grooves and divots of the 1990s drawing board.  A dysfunctionate and affectional domino effect that often turns left though the right blinker's been on for miles.

Winner of the 2018 Goncourt Prize, this poignant coming-of-age tale captures the distinct feeling of summer in a region left behind by global progress.

August 1992. One afternoon during a heatwave in a desolate valley somewhere in eastern France, with its dormant blast furnaces and its lake, fourteen-year-old Anthony and his cousin decide to steal a canoe to explore the famous nude beach across the water. The trip ultimately takes Anthony to his first love and a summer that will determine everything that happens afterward.

Nicolas Mathieu conjures up a valley, an era, and the political journey of a young generation that has to forge its own path in a dying world. Four summers and four defining moments, from “Smells Like Teen Spirit” to the 1998 World Cup, encapsulate the hectic lives of the inhabitants of a France far removed from the centers of globalization, torn between decency and rage.

Nicolas Mathieu was born in Épinal, France, in 1978. His first novel, Aux animaux la guerre, was published in 2014 and adapted for television by Alain Tasma in 2018. He received the Goncourt Prize, France's most prestigious literary award, in 2018 for his second novel, And Their Children After Them. He lives in Nancy.

William Rodarmor is a former journalist who has translated some forty-five books and screenplays in genres ranging from literary fiction to espionage and fantasy. In 2017 he won the Northern California Book Award for fiction translation for The Slow Waltz of Turtles by Katherine Pancol. He lives in Berkeley, California.

“[A] page-turner…As suffused with local color as this book is, parallels with left-behind swaths of America (and England, and many other places, too) stand out on every page…It is easy to see why this novel, which arrives just on time and contains the secret history of the current political upheaval, would find such critical acclaim…I couldn’t put the book down. I didn’t want it to end.” —New York Times Book Review

“[The 1990s is] a decade ripe for its novel. This is what And Their Children After Them masterfully provides…a novel that is delightfully detached and disabused, and yet knows when to let down its guard and be moving.” —Los Angeles Review of Books

“Although acts of violence punctuate the families’ journey through the decade, And Their Children After Them…finds space too for beauty, for tenderness, for hope…the half-lyrical, half-prophetic tone reminded me of DH Lawrence…an elegiac anthem, one drenched in ‘the terrible sweetness of belonging.’” —Financial Times

“A masterly, far-reaching exploration of a de-industrialized country which ‘treated its families like a minor footnote to society’…And Their Children After Them invites comparison with the great realist and naturalist writers of the French nineteenth century.” —Times Literary Supplement

“A portrait of teenagers growing up in a forgotten, hopeless region of France in the 1990s...Mathieu's book has been acclaimed in France for shining a light on a forgotten part of the country...[he has] received domestic acclaim and international attention for writing about working-class youth.” —New York Times

“Mathieu captures the vulnerability and awkwardness of adolescence with painful acuity…A gritty, expansive coming-of-age novel filled with sex and violence that manages to be tender, even wryly hopeful.” —Kirkus Reviews

“As anguished as it is elegiac, as universal as it is grounded in the vivid particularities of its setting—1990s Rust Belt France—And Their Children After Them evokes the beautiful, miserable, longing-plagued experience of being an adolescent as pointedly and powerfully as any novel published since The Virgin Suicides.” —Adam Levin, author of Bubblegum and The Instructions

“This is an important book, whose characters stay with us long after the last pages have been turned...it gives us the keys to better understand the extent of the current rejection of our political and economic elites.” —Libération

“By focusing on the margins of society, Nicolas Mathieu sees what the tinkerers of comforting literature miss.” —Le Figaro

“A great novel. At once genuine, profound, and beautiful.” —Le Canard Enchaîné