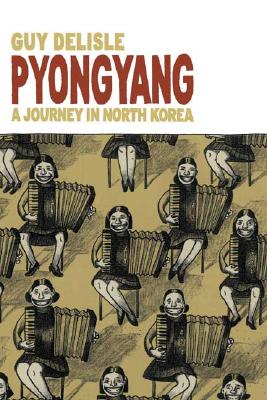 “It’s a wonder the places Guy Delisle has been. From Burma to the Middle East to China, his graphic travelogues boast a unique and specific voice, even in the bleakest landscapes. His travels all began with Pyongyang, and it’s a journey described in stark charcoaled renderings that feel documentary, a bit grim, and yet never lose the warm curiosity that permeates his work. The Guy Delisle trademark is a thoughtful, deliberate, fresh, and careful line of work…with occasional dad jokes. I treasure every panel.”
— Alex Meriwether, Harvard Book Store, Cambridge, MA

A westerner's visit into North Korea, told in the form of a graphic novel.

Famously referred to as one of the "Axis of Evil" countries, North Korea remains one of the most secretive and mysterious nations in the world today. In early 2001 cartoonist Guy Delisle became one of the few Westerners to be allowed access to the fortresslike country. While living in the nation's capital for two months on a work visa for a French film animation company, Delisle observed what he was allowed to see of the culture and lives of the few North Koreans he encountered; his findings form the basis of this remarkable graphic novel. "Pyongyang "is an informative, personal, and accessible look at a dangerous and enigmatic country.

Guy Delisle was born in Quebec City in 1966 and has spent the last decade living and working in France. He has written and drawn four graphic novels, including "Shenzhen," an account of his travels to China. "Pyongyang" is his first in English.

"Guy Delisle is a wry 37-year-old French Canadian cartoonist whose work for a French animation studio requires him to oversee production at various Pacific Rim studios on the grim frontiers of free trade. His employer puts him up for months at a time in 'cold and soulless' hotel rooms where he suffers the usual maladies of the long-term boarder: cultural and linguistic alienation, boredom, and cravings for Western food and real coffee. Delisle depicts these sojourns into the heart of isolation in [the] brilliant 'graphic novel' . . . Pyongyang." --Foreign Affairs