The Way It Was.. and That: Recollections of Old Mayo (Paperback) 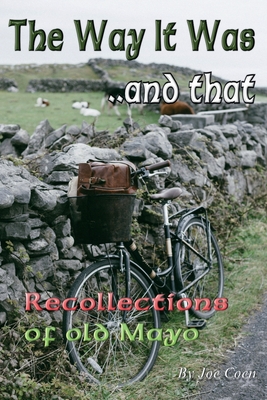 Aghamore, Co. Mayo during the War years. "Most of the grown-ups in my time had learnt how to ride a bicycle, and so bicycles were fairly plentiful. However the period of which I speak was during the Second World War years, and so bicycles and parts for them became scarce and most expensive. Those who had wealth could always find a good bicycle to buy, but the poor had to improvise. I remember seeing bicycles parked outside the church with pedals made of a square piece of wood. Tyres too had to be invented to match the new circumstance. Sometimes little discs of old tyres were strung together with wire rather like a string of daisies, and these, when fitted on the bicycle wheels, acted as solid tyres. Others used to twist a rope of hay and wrap it around the rim of the wheels and then fit an old tyre on over the hay rope. Somehow we all learnt how to ride a bicycle, and the burning ambition of most young people was to have a bicycle of their own. The first bicycle that I owned was a fairly basic model. It had two good wheels and a new chain, and one good brake. Extravagances like handgrips or carriers were not essential. Later I graduated to a bicycle with a three-speed gear and a hub dynamo.

Very soon the days of the bicycle were over. Bright colours or even five-speed gears did not satisfy. The bicycles were abandoned under the hedges to rot away and everybody aspired to have at least one motor car in the household. I must admit that like the rest of men I too succumed to the craze of the motor car."

And so begins this storybook of nostalgic recollections of what it was like to grow up in rural Co. Mayo during the War years. Another gem from Joe Coen following on from the equally-charming, "Two Dry Sods - Tales from Old Mayo".