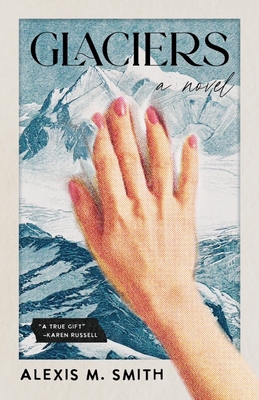 “Alexis Smith’s brilliant debut novel is filled with kaleidoscopic pleasures. Line by line, in and out of time, this is a haunted, joyful, beautiful book—a true gift.” —Karen Russell

“Her story could be told in other people’s things. The postcards and the photographs. A garnet ring and a needlepoint of the homestead. The aprons hanging from her kitchen door. Her soft, faded, dog-eared copy of Little House in the Big Woods. A closet full of dresses sewn before she was born. All these things tell a story, but is it hers?”

Isabel is a single twenty-something in Portland, Oregon, who repairs damaged books in the basement of the local library, dreaming of a life she can’t quite reach. She is filled with longing—for a life in Amsterdam even though she’s never visited, for the unrequited love of a coworker, for a simpler time from her childhood in Alaska among the threatened glaciers she loves, and for the perfect vintage dress to wear to a party that just might change everything.

Unfolding over the course of a single day, Alexis M. Smith’s shimmering debut finds Isabel looking into her past—remembering her parents’ separation and a life-changing encounter with a glacier—and shows us how fleeting, everyday moments can reveal an entire life. In classic movies, in old photographs and unsent postcards, rare books, and thrifted gems, Glaciers tells the story of a young woman’s love of the past and a hope to make something new and all her own.

Alexis M. Smith is the author of Marrow Island, winner of the Pacific Northwest Booksellers Association Award for Fiction and the Lambda Literary Award. She lives in Spokane, Washington.

Glaciers has all the things I love about reading: an engaging story, beautiful writing, and memorable characters. Isabel's story broke the reading slump I was in because it's different from all the other books out there in one particular way: it's wholly unique, a hidden gem.

An Alaska childhood and dreams of faraway cities such as Amsterdam inform Alexis M. Smith’s Glaciers, a delicate debut novel set in Portland, Oregon—“a slick fog of a city. . . . drenched in itself”—that reveals in short, memory-soaked postcards of prose a day in the life of twentysomething library worker Isabel.

How appropriate that on the last page of this spare, beautifully written first novel, one character asks another, “Tell us a story—about longing.” For longing defines the life of Isabel, who grows up on Cook Inlet in Alaska and, after a trip to towering Seattle, begins collecting postcards from other cities, among them Paris, Budapest, and Barcelona. As an adult, Isabel finds a postcard depicting Amsterdam at a junk store she frequents—she loves old things; her job is restoring damaged books at a library—and is astonished to find that the postcard was actually sent. The card carries a message that inspires her to construct a story about sender and recipient. Isabel needs to work a little harder to construct her own story, though; an ungainly child, she’s still tentative about relationships and gingerly approaches Spoke, a colleague at the library who served in Iraq. A series of events, one involving a note about Amsterdam left in a book she’s repairing, wheels her gracefully in a different direction.
— Library Journal

Smith’s debut unspools in delicate links of linear thought, told (mostly) in deceptively simple sentences embedded in the consciousness of Isabel, born in the Pacific Northwest and raised in Alaska with her older sister. Isabel dreams of Amsterdam and, “though she has never been, and probably will never go,” she believes everything is perfect there. The story ostensibly covers a single day, but Isabel’s recorded memories reach back to childhood, with incidents in between like a camping trip, an interaction with an astrologer, and a consequential encounter with an immense glacier. Isabel’s love of books leads her to get a job at the library, where she falls for co-worker “Spoke,” an Iraq war veteran whose sudden re-enlistment casts a long shadow, turning Isabel introspective at the festive party she’d planned to attend with him: 'Spoke is already halfway across the country, where people are making breakfast, letting dogs out onto dewy lawns, boarding busses and trains for downtowns, lining up in coffee shops,” she thinks, while “[i]n Amsterdam, it is already a lovely afternoon, the leaves turning, fall about to break.' This slim book’s lovely design respects and enhances Smith’s voice, with ample white space on every page and a general eschewing of commas and quotation marks. Lyrical and luminous.
— Publishers Weekly, Starred Review

Glaciers, Alexis Smith’s brilliant debut novel, is filled with kaleidoscopic pleasures. Using prose as clear as pure, cold air, Smith moves the narrative vertically as well as horizontally, each ticking minute yielding more insights into a young woman’s life revealed over one single day. The past, present, and imaginary future stream into beautifully unstable geometries: Isabel's childhood snows from her youth in Alaska are juxtaposed against her adult trip to a vintage thrift store; her hopes for an evening party push against the echoes of war that haunt a young soldier whom she loves. Line by line, in and out of time, this is a haunted, joyful, beautiful book--a true gift.

The story is one of longing: longing for a life in a faraway city, for the love of a co-worker to be requited, for a closet full of vintage dresses. The book takes place over the course of one day in twenty-something Isabel’s life, with glimpses of her past remembered in-between. The present is used as a point of reference for the past, and although the story moves back and forth, the prose reads smooth like running water.
— The Rumpus

In short novels like this one, every word has added resonances, and Smith has taken careful measure of every passage, testing each line for symbolic effect.
— The Star Tribune

This weaving together of the personal, the sentimental, the environmental, and the trivial gives Smith's unassuming first novel surprising emotional weight.
— The Portland Mercury

A delicate and piercing first novel. Glaciers is like a vintage dress: charming, understated and glinting with memories of loneliness and love.

Glaciers is a carefully precise and beautiful meditation on one young woman’s restless heart. It resonates like a haunting postcard from someone else’s life.

I cannot easily remember the last time I've been so deeply moved as in this quiet treasure.
— Douglas A. Martin