Seriously Not All Right: Five Wars in Ten Years (Hardcover) 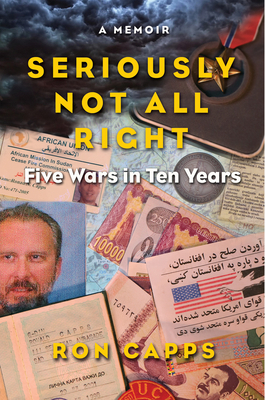 For more than a decade, Ron Capps, serving as both a senior military intelligence officer and as a Foreign Service officer for the U.S. Department of State, was witness to war crimes, ethnic cleansing, and genocide. From government atrocities in Kosovo, to the brutal cruelties perpetrated in several conflicts in central Africa, the wars in both Aghanistan and Iraq, and culminating in genocide in Darfur, Ron acted as an intelligence collector and reporter but was diplomatically restrained from taking preventative action in these conflicts. The cumulative effect of these experiences, combined with the helplessness of his role as an observer, propelled him into a deep depression and a long bout with PTSD, which nearly caused him to take his own life. Seriously Not All Right is a memoir that provides a unique perspective of a professional military officer and diplomat who suffered (and continues to suffer) from PTSD. His story, and that of his recovery and his newfound role as founder and teacher of the Veterans Writing Project, is an inspiration and a sobering reminder of the cost of all wars, particularly those that appeared in the media and to the general public as merely sidelines in the unfolding drama of world events.

Ron Capps is the founder and director of the Veterans Writing Project, a nonprofit that provides no-cost writing seminars and workshops for veterans, active and reserve service members, and military family members. He is the curriculum developer and lead instructor for the National Endowment for the Arts programs that bring expressive and creative writing seminars to wounded warriors at the National Intrepid Center of Excellence. His literary writing has appeared in the Delmarva Review, JMWW, the Little Patuxent Review, the New York Times, Prime Number, RiverLit, and in numerous online venues. His policy writing and commentary have appeared regularly in the American Interest, Foreign Policy, Health Affairs, Monthly Developments Magazine, and Time magazine’s Battleland blog and on NPR’s All Things Considered, the BBC World Service, and Pacifica Radio. He has been a consultant to Frontline, PBS’s Newshour, Rolling Stone, and Vanity Fair. A combat veteran of Afghanistan, he served in the Army and Army Reserve for 25 years, retiring as a lieutenant Colonel. He lives in Washington, DC.

“The writing is crisp, authoritative, rueful, very much alive in the face of death, and political in the best sense: an eyewitness account.”  —Bill Roorbach, author, Life Among Giants

"An affecting meditation about our recent expeditionary wars and the consequences for those we have sent into the fight." —Rick Atkinson, author, the Liberation Trilogy

"This powerful and necessary work teaches us that, while we cannot expunge the ghosts of history, we can and must bear witness and share the truth as we know it." —Richard Currey, author, Fatal Light and Crossing Over: The Vietnam Stories

"This searing memoir recounts the horrors Capps encountered and their devastating effects on his psyche and soul. Capps’s telling of his story of war and bearing witness is vitally important for “the 99% of Americans who sat out the wars in Afghanistan and Iraq." —Publishers Weekly

"An admirable, important memoir from a combat veteran and observer of genocide." —Donald Powell, shelfawareness.com