Friday Was the Bomb: Five Years in the Middle East (Paperback) 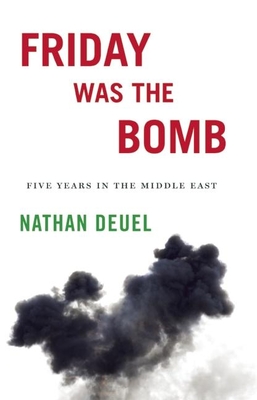 In 2008, Nathan Deuel, a former editor at Rolling Stone and The Village Voice, and his wife, a National Public Radio foreign correspondent, moved to the deeply Islamic Kingdom of Saudi Arabia to see for themselves what was happening in the Middle East. There they had a daughter, and later, while his wife filed reports from Baghdad and Syria, car bombs erupted and one night a firefight raged outside the family's apartment in Beirut. Their marriage strained, and they struggled with the decision to stay or go home. At once a meditation on fatherhood, an unusual memoir of a war correspondent's spouse, and a first-hand account from the front lines of the most historic events of recent days--the Arab Spring, the end of the Iraq war, and the unrest in Syria--Friday Was The Bomb is a searing collection of timely and absorbing essays. Nathan Deuel has contributed essays, fiction, and criticism to The New York Times, Financial Times, GQ, The New Republic, Times Literary Supplement, Virginia Quarterly Review, The Paris Review, Salon, Slate, Bookforum, Los Angeles Review of Books, Columbia Journalism Review, Tin House, The Atlantic, and many others. Previously, he was an editor at Rolling Stone and The Village Voice. He holds an M.F.A. from the University of Tampa and a B.A. in Literature from Brown University, and he attended Deep Springs College. He recently moved to Los Angeles from Beirut with his wife and daughter.

Nathan Deuel: Nathan Deuel contributed essays, fiction, and criticism to The New York Times, The New Republic, Financial Times, GQ, and The Paris Review, among others. In 2013, he was named first runner-up in Ploughshares' annual Emerging Writer contest. Previously, he was an editor at Rolling Stone and The Village Voice. His wife, Kelly McEvers, is NPR's Beirut bureau chief. www.nathandeuel.com