Divide Me By Zero (Hardcover) 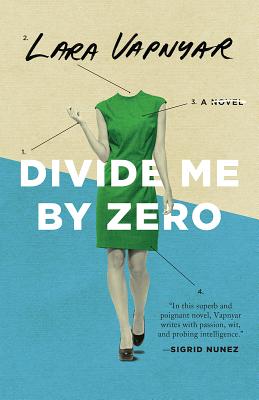 Lara Vapnyar’s Divide Me By Zero is about love. It’s about a mother’s love, love lost, falling in love, what one would do for love, for, after all, isn’t love the most important thing? Katya Geller is an immigrant from the Soviet Union whose father died young (broke her mother’s heart), and whose mathematician mother was more than a little harsh. While in the midst of a mid-life crisis and her mother’s death, Katya finds the notes for her mother’s last unwritten math textbook. Using them to reflect upon her life and analyze how she got to this point is ridiculously entertaining. Vapnyar writes beautiful, weird, funny characters and the book is full of “warning notes to parents” regarding their children that are spot-on.

Divide Me By Zero is about love. It's about a mother's love, love lost, falling in love, and what one would do for love. Vapnyar writes beautiful, weird, funny characters.

As a young girl, Katya Geller learned from her mother that math was the answer to everything. Now, approaching forty, she finds this wisdom tested: she has lost the love of her life, she is in the middle of a divorce, and has just found out that her mother is dying. Nothing is adding up.

With humor, intelligence, and unfailing honesty, Katya traces back her life’s journey: her childhood in Soviet Russia, her parents’ great love, the death of her father, her mother’s career as a renowned mathematician, and their immigration to the United States. She is, by turns, an adrift newlywed, an ESL teacher in an office occupied by witches and mediums, a restless wife, an accomplished writer, a flailing mother of two, a grieving daughter, and, all the while, a woman caught up in the most common misfortune of all—falling in love.

Lara Vapnyar came to the US from Russia in 1994. She is a recipient of the Guggenheim fellowship, and Goldberg Prize for Jewish fiction. She is the author of There Are Jews in my House, Memoirs of a Muse, Broccoli and Other Tales of Food and Love, The Scent of Pine, and Still Here. Her stories and essays have appeared in The New Yorker, The New York Times, Harper's, and Vogue.

Elegiac yet funny.
— The New Yorker

Divide Me by Zero is, despite its honesty about the difficulties of a life fully lived, a celebration: a sensitively told, honest account of the messiness and beauty of loving with abandon and living in a manner that defies easy categorization, numerical or otherwise.

One of the greatest books of the last decade.
— BOMB Magazine

Woven together with math concepts and plenty of raw feelings, this is a love story for those who are forever engaged in the pursuit of happiness.
— Booklist, Starred Review

It's almost impossible to put the book down without devouring it in one sitting. A poignant, vivid, and frequently funny novel.
— Kirkus Reviews

Among the many pleasures of the novel is Vapnyar’s portrayal of the intellectual connection Katya has with her children, which is disarmingly lovely. . . . This is a frank, amusing, and melancholy novel.
— Publishers Weekly

Vapnyar's latest is the fascinating story of a brilliant, emotionally volatile protagonist whose wicked humor appears in frequent asides made directly to the reader, along with a smattering of whimsical graphics, and Nina’s handwritten notes for her unrealized textbook. Smart, complicated, irresistible.
— Library Journal

Divide Me by Zero plunges into dark comedic territory with savage grace. . . . A novel that treats the emotional territory of adulthood with devastating aplomb.

In her superb and poignant new novel, Lara Vapnyar writes about love and other difficulties with the same passion, wit, and probing intelligence to be found in all her writing. Among its many treasures, Divide Me By Zero contains fascinating explorations of the fraught, tangled nature of both romantic and family relationships, and some of the most affecting scenes of bereavement I have ever read.

— Sigrid Nunez, author of What Are You Going Through

Lara Vapnyar is one of my very favorite writers: funny and true and with the rare talent to assemble one ideally telling scene after another. She is also one of the few writers I would recommend to all my friends, with all their varying tastes, because the charisma of her storytelling is unmissable.
— Rivka Galchen, author of Little Labors

Divide Me by Zero is a keen, penetrating novel about the quest for love—romantic and otherwise—that drives one woman’s life. Lara Vapnyar brilliantly evokes (by way of, yes, math) a span of decades, a pair of continents, and a plethora of uneasy emotions. This book is so unflinchingly honest about the human condition that I couldn't put it down.

— Helen Phillips, author of The Need

Everything I love about Lara Vapnyar’s vision and voice—her blazing intelligence, skewering wit and exuberant prose—is contained in this wild and witty novel. I don’t know how her work manages to feel absolutely timely and perfectly timeless all at once. Divide Me By Zero is an inventive page-turner that explores familial and romantic love, passion, the inevitability of grief, and the ways we manage all of those things in compassionate and wonderfully surprising ways. I was so sorry when I finished and I’ll think about this book and its characters for a very long time.