Watermelon and Red Birds: A Cookbook for Juneteenth and Black Celebrations (Hardcover) 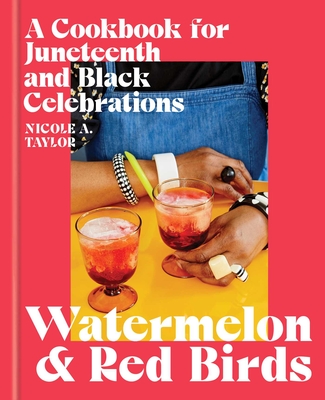 What a joy to read the beautiful Watermelon and Red Birds cookbook cover to cover, dog-earing pages of recipes! The latest cookbook from local author and uber-talented Nicole Taylor is a must-read for those who want to know more about Juneteenth and for those who get excited about fresh takes on old standards. Watermelon and Red Birds will be published on the first anniversary of Juneteenth being made a national holiday and Taylor's recipes are the real deal. Make sure you check out the Fig Vinegar BBQ Sauce inspired by my homegrown Normaltown figs Nicole loves. Linger slowly and enjoy Taylor's essays as she's sharing her story as a Black American in one of the most personal ways one can: by talking about how she feeds her family, her friends, and her soul.

The very first cookbook to celebrate Juneteenth, from food writer and cookbook author Nicole A. Taylor—who draws on her decade of experiences observing the holiday.

All-day cook-outs with artful salads, bounteous dessert spreads, and raised glasses of “red drink” are essential to Juneteenth gatherings. In Watermelon and Red Birds, Nicole puts jubilation on the main stage. As a master storyteller and cook, she bridges the traditional African-American table and 21st-century flavors in stories and recipes. Nicole synthesizes all the places we’ve been, all the people we have come from, all the people we have become, and all the culinary ideas we have embraced.

Watermelon and Red Birds contains over 75 recipes, including drinks like Afro Egg Cream and Marigold Gin Sour, dishes like Beef Ribs with Fermented Harissa Sauce, Peach Jam and Molasses Glazed Chicken Thighs, Southern-ish Potato Salad and Cantaloupe and Feta Salad, and desserts like Roasted Nectarine Sundae, and Radish and Ginger Pound Cake. Taylor also provides a resource to guide readers to BIPOC-owned hot sauces, jams, spice, and waffle mixes companies and lists fun gadgets to make your Juneteenth special. These recipes and essays will inspire parties to salute one of the most important American holidays, and moments to savor joy all year round.

Nicole A. Taylor is a James Beard Award–nominated food writer, master home cook, and producer. She has written for the New York Times, Bon Appétit, and Food & Wine. Nicole is the author of The Up South Cookbook and The Last O.G. Cookbook. She is the executive producer of If We So Choose, a short documentary about the desegregation of an iconic southern fast food joint. Nicole is the cofounder of The Maroon, a marketplace and retreat house focused on radical rest for Black creatives. She lives in New York City and Athens, Georgia, with her husband and son.

"Watermelon and Red Birds is a call for us all to celebrate Black joy and freedom in its many facets. Nicole Taylor has gifted the world with a breathtaking cookbook that is grounded in history and tradition while keeping one eye on the ever-evolving nature of culture, customs, and foodways. This book reminds us that Black folks should own and drive the way we celebrate our historical milestones, and what better way to do so than over a full plate with family and friends." —Bryant Terry, James Beard award-winning author of Black Food and Editor-in-Chief of 4 Color Books

"Juneteenth is not just about a moment; it's about a celebration of freedom--to choose, to experiment and to enjoy. Nicole Taylor exemplifies soul food as construct rather than canon--a place where dynamic ideas about food keep us grounded in the tradition while unfettering us from the expected and overplayed. The dance she takes us on in our kitchens is a thrill. Watermelon and Red Birds: A Cookbook for Juneteenth and Black Celebrations is revolutionary. "—Michael W. Twitty, James Beard Award-winning author of The Cooking Gene, Rice, and Koshersoul

"My friend Nicole Taylor has a curiosity that is infectious and tenacious, and matched only by her love for her people. For Us. This particular combination has been to the great benefit of the U.S. food writing canon, to the professional food writing community, and to YOU….These recipes are illustrative of her gifts, moving us seamlessly from the historic to the contemporary, with ingredients and rhetoric together reinforcing a clear thesis – 'I put on for my people.’" —Stephen Satterfield, founder of Whetstone Media, host of High on the Hog

"With Watermelon and Red Birds, Nicole Taylor liberates us from the limitations and labels that have narrowly defined African American cooks and their cooking for generations. Her recipes and stories encourage us to celebrate freedom on our own terms, with eyes fixed on the future and cooking with joy." —Toni Tipton-Martin, Editor in Chief, Cook’s Country, magazine and PBS television show, and award-winning author of Jubilee: Recipes From Two Centuries of African American Cooking, and The Jemima Code Two Centuries of African American Cookbooks

"Nicole Taylor chronicles Black foodways with expertise and warmth, crafting recipes you'll find yourself immediately adding to your weekly repertoire. Watermelon and Red Birds is an astounding text, both definitive and generous, abundant and joyful." —Bryan Washington, author of Lot and Memorial

“The prolific Nicole Taylor has taken us on a brilliant exploration of African American culture in Delicious Bites. It’s full of amazing stories but most of all it stays true to the culture. This is a must-read for all.” —JJ Johnson, chef and founder of FIELDRTIP

"As with every Nicole Taylor gathering I’ve attended, Watermelon and Red Birds is vivid with joy and aliveness. The story of Juneteenth that grounds this festive recipe collection celebrates the places we’ve been and the people we’ve become. This cookbook, rich with poignant history, refreshing anecdotes, and Taylor’s singular ability to convey the global reach of Southern-inspired cuisine, is the spirited guide many of us have been craving. Consider this timely treasure a labor of love for Black American food culture, and an invitation to embrace its evolving ingenuity and creativity all year long."—Osayi Endolyn, James Beard-Award winning food and culture writer

"Juneteenth is a newly minted holiday but an old celebration. In Watermelon and Red Birds, Nicole Taylor provides an impressive array of new recipes for a new generation to tip a glass of red drink and savor the flavors of this new jubilee. Along each step of the way, she reminds us of the history and evolution of this most delectable and needful American holiday." —Lolis Eric Elie, co-author Rodney Scott's World of Barbecue