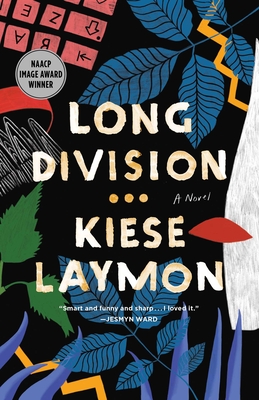 Was life so different in 1964, 1985, 2013?  This life-changing, time-traveling book within a book that explores the struggle of being a Black 14 year old in Mississippi. Laymon highlights the themes that matter most (family, love, the written word) and the racism that permeates the South - it never really goes away as the years go on, it just takes on different forms in its various cycles. This book is beautiful, thought-provoking, and absolutely necessary.

Kiese Laymon's novel Long Division debuted in 2013 and has been revised and re-released. This novel contains two interconnected stories about one Mississippi town during three different years (2013, 1985, 1964) that reveal the intricately connected story of four Mississippi teenagers. Laymon uses time travel as a plot device as much as he uses the discussion and breakdown of language and words. Long Division is an adventure story about racism and family that contains more than one mystery with plenty of fun stirred in for flavor. This book has attitude and swagger and I'm down for it.

From Kiese Laymon, author of the critically acclaimed memoir Heavy, comes a “funny, astute, searching” (The Wall Street Journal) debut novel about Black teenagers that is a satirical exploration of celebrity, authorship, violence, religion, and coming of age in post-Katrina Mississippi.

Written in a voice that’s alternately humorous, lacerating, and wise, Long Division features two interwoven stories. In the first, it’s 2013: after an on-stage meltdown during a nationally televised quiz contest, fourteen-year-old Citoyen “City” Coldson becomes an overnight YouTube celebrity. The next day, he’s sent to stay with his grandmother in the small coastal community of Melahatchie, where a young girl named Baize Shephard has recently disappeared.

Before leaving, City is given a strange book without an author called Long Division. He learns that one of the book’s main characters is also named City Coldson—but Long Division is set in 1985. This 1985-version of City, along with his friend and love interest, Shalaya Crump, discovers a way to travel into the future, and steals a laptop and cellphone from an orphaned teenage rapper called...Baize Shephard. They ultimately take these items with them all the way back to 1964, to help another time-traveler they meet to protect his family from the Ku Klux Klan.

City’s two stories ultimately converge in the work shed behind his grandmother’s house, where he discovers the key to Baize’s disappearance. Brilliantly “skewering the disingenuous masquerade of institutional racism” (Publishers Weekly), this dreamlike “smart, funny, and sharp” (Jesmyn Ward), novel shows the work that young Black Americans must do, while living under the shadow of a history “that they only gropingly understand and must try to fill in for themselves” (The Wall Street Journal).

Born and raised in Jackson, Mississippi, Kiese Laymon, Ottilie Schillig Professor in English and Creative Writing at the University of Mississippi, is the author of the novel Long Division, the memoir Heavy, and the essay collection How to Slowly Kill Yourself and Others in America.

“Printed for the first time in the reversible format Laymon always wanted, Long Division shines brighter than ever.”
—Esquire

"Originally published in 2013 and reissued here in a newly revised edition, this debut novel by the author of the memoir Heavy is a time-traveling metafictional romp set in Mississippi that probes fame, creativity and the toll of racism."
—New York Times "New and Noteworty"

"A must-read. Long Division centers on City Coldson, a 14-year-old whose viral outburst on national television earns him a one-way ticket to stay with his grandmother by the sea. It’s not supposed to be fun and games, but when City begins to read a mysterious, anonymously published book about a time traveler who shares his name, he finds himself pulled unexpectedly into a temporal mystery."
—Bustle

“The reissue of Kiese Laymon’s Long Division echoes a familiar Black church precept of doing your first works over. In this new iteration of his 2013 debut novel, Laymon separates the story into two books, or testaments…[Long Division] forth the open-ended question: To what length would you go to save your family and yourself, even if it meant the destruction of another?”
—Chapter 16

"Originally published in 2013 and reissued here in a newly revised edition, this debut novel by the author of the memoir “Heavy” is a time-traveling metafictional romp set in Mississippi that probes fame, creativity and the toll of racism."
—New York Times "New and Noteworty"

“A revised version of Laymon’s elliptical, time-folding work of metafiction about Southern racism... is effectively two novels, both potent yet often funny character studies. In style and structure, Laymon’s novel is an inheritor to Black postmodern literature of the 1960s and '70s—Toni Morrison most famously but also Leon Forrest, Gayl Jones, and William Melvin Kelley. A sui generis.”
—Kirkus

"With Long Division, Laymon gives us a story that embodies the ellipsis, the idea of an understood but unspoken beginning and ending. Narratives very rarely end; they go through edits and revisions. Characters are added and erased. For a book that begins with a grammar and language competition, Long Division fittingly ends with a statement about language, and that statement is that language, like history, never stops moving forward."
—Los Angeles Review of Books

"A little fantasy, a little mystery and a lot hilarious."
—Atlanta Journal-Constitution

"In a multilayered, allusion-packed, time-traveling plot set in Mississippi, Long Division takes us, nesting-doll-style, from 2013 to 1985, 1964, and back, engaging complex questions of race, violence, gender, sexuality, and our relationship to history. More than anything, Laymon shows with surprising lucidity how American racialized inequality is persistent but mutable, that the past is not the present, but isn’t, either, entirely past."
—The Boston Review

"Kiese Laymon is an amazing, courageous and brave novelist and essayist.... Laymon fiercely tackles issues of prejudice, adolescence and love with a swagger and confidence all his own. You rarely find novels this honest and engaging. Read this book."
—Michigan Quarterly Review

"Laymon’s voice is unique, a rarity in an era during which fiction tends all too often to chase trends.... At times touching, at times poignant, Laymon more than once strikes a beautiful chord in the midst of what often feels gritty and intentionally provocative. Those touching insights make Long Division worth the effort, and readers who stick with the story (stories, actually) will find themselves thinking about City and the people in his life long after they close the book."
—Chicago Book Review

"Long Division is a serious book about race and love with a thread of humor running through it, emerging largely from Laymon's wordplay and the cultural gaps that exist between characters from the past, present and future. With roots in Southern and African American literature, Long Division is an historical novel that touches on the aftermath of Hurricane Katrina, and a work of magical realism in the tradtion of Haruki Murakami."
—Contemporary Literature

"A novel within a novel—hilarious, moving and occasionally dizzying.... Laymon cleverly interweaves his narrative threads and connects characters in surprising and seemingly impossible ways. Laymon moves us dazzlingly ... from 1964 to 1985 to 2013 and incorporates themes of prejudice, confusion and love rooted in an emphatically post-Katrina world."
—Kirkus Reviews

"Laymon’s debut novel is an ambitious mix of contemporary southern gothic with Murakamiesque magical realism ... the book elegantly showcases Laymon’s command of voice and storytelling skill in a tale that is at once dreamlike and concrete, personal and political."
—Booklist

"[One of] our best books of the year so far ... Layman’s debut novel is bursting with colloquial language from three generations of Mississippi African Americans, mixed with gut-piercing truths about a long racial divide that persists to this day."
—School Library Journal

"Smart and funny and sharp ... I loved it."
—Jesmyn Ward, author of Sing, Unburied, Sing

"[An] ambitious novel ... it is the most exciting book I’ve read all year. There’s nothing like it, both in terms of the scope of what the book tackles and the writing’s Afro Surrealist energy."
—Roxane Gay, author of Difficult Women and Hunger

“Smart, exciting and energetic ... the language romps and roars along through some truly wonderful comic scenes and yet the book doesn’t hesitate to comment seriously on questions that matter to human beings everywhere, not just in rural Mississippi.”
—Victor LaValle, author of Big Machine and Slapboxing with Jesus

"Long Division finally gave me what I’ve wanted to see in contemporary southern literature. For years I’ve complained about no recent accounts of black southerners in American Literature. It goes down in southern rap – which we’ll get to in the following paragraphs – but in literary studies it’s always been the old guard: Hurston, Ellison, Wright, Gaines, and Alice Walker (I swear, if I read “Everyday Use” in one more class I’d quit life). Long Division basically told me 'sit down and shut the hell up. Here it is. Here’s what you wanted.'”
—Regina Bradley, author of Outkasted Conversations

"As if anything could be beyond what Laymon has done for race, temporality, geography, and the South—as well as for the real and transhistorical black southerner—there is also what Long Division does for questions of love, death, and dying. Across cities/Cities, there is the looming and encompassing quality of love that bends sexuality and familial boundaries."
—Zandria Robinson, author of This Ain't Chicago and Chocolate Cities

"Long Division is one of those books that I picked up and just couldn’t stop reading ... powerful, a classic American novel."
—Jeff Chang, author of Who We Be: A Cultural History of Race in Post-Civil Rights America and We Gon' Be Alright: Notes on Race and Resegregation

“Laymon is a brilliant young writer...this is a book that sings in the heart but challenges readers to take careful consideration of the power of memory. Like the best of Hurston, Ellison, or Bambara, Laymon’s craft flows on frequencies that both honor and extend the traditions those writers established.”
—William Henry Lewis, author of I Got Somebody in Staunton

“The racial/ethical awareness is as complex as Coetzee’s, and Laymon is just as good a writer. Laymon takes some real risks. I love the interplay of spirituality and sexuality. Nothing sounds forced, pandering or trendy. City, the husky citizen of the imagination, feels totally singular and totally representative. That’s tough to pull off.”
—Tim Strode, author of Ethics of Exile